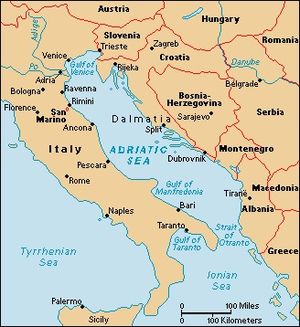 The western coast is Italian, while the eastern coast runs mostly along Croatia, but lesser parts belong to Slovenia, Bosnia and Herzegovina, Montenegro, and Albania. Major rivers joining the Adriatic are the Reno, Po, Adige, Brenta, Piave, Soča (Isonzo), Neretva. The Adriatic Sea is situated largely between the eastern coast of Italy and Croatia.

The Adriatic extends northwest from 40° to 45° 45′ N., with an extreme length of about 770 km. The northern part of the Adriati sea is very shallow, and between the southern promontories of Istria and Rimini the depth rarely exceeds 46 meters. Between Šibenik and Ortona a well-marked depression occurs, a considerable area of which exceeds 180 m in depth.

From a point between Korčula and the north shore of the spur of Monte Gargano there is a ridge giving shallower water, and a broken chain of a few islets extends across the sea.

The deepest part of the sea lies east of Monte Gargano, south of Dubrovnik, and west of Durrës where a large basin gives depths of 900 m and upwards, and a small area in the south of this basin falls below 1,460 m . The mean depth of the sea is estimated at 240 m.

The west shore is generally low, merging, in the northwest, into the marshes and lagoons on either hand of the protruding delta of the river Po, the sediment of which has pushed forward the coastline for several miles within historic times.

The east coast is generally bold and rocky, with many islands. South of the Istrian Peninsula, the island-fringe of the east coast extends as far south as Dubrovnik.

The islands, which are long and narrow (the long axis lying parallel with the coast of the mainland), rise rather abruptly to elevations of a few hundred feet, with the exception of a few larger islands like Brač (Vidova gora, 778 m) or the peninsula Pelješac (St. Ilija, 961 m). There are over a thousand islands in the Adriatic, 66 of which are inhabited. Both coasts are popular tourist destinations and many consider this sea the most beautiful in the world.[1]