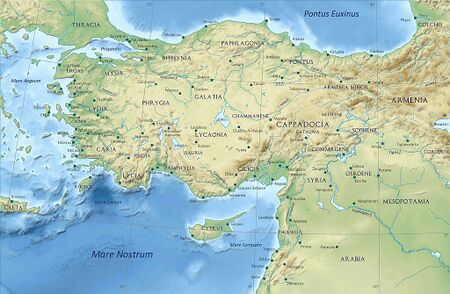 Aeolis was an area that comprised the west and northwestern region of Asia Minor, mostly along the coast, and also several offshore islands (particularly Lesbos), where the Aeolian Greek city-states were located. Aeolis incorporated the southern parts of Mysia, which bounded it to the north, Ionia to the south and Lydia to the east.

Ahlawat - The Aeolians inhabitant of Aeolis, an area that comprised the west and northwestern region of Asia Minor, mostly along the coast, may have given name to Ahlawat clan. These were subjugated by Alexander. [2]

Aeolis was an ancient district on the western coast of Asia Minor. It extended along the Aegean Sea from the entrance of the Hellespont (now the Dardanelles) south to the Hermus River (now the Gediz River). It was named for the Aeolians, some of whom migrated there from Greece before 1000 BC. Aeolis was, however, an ethnological and linguistic enclave rather than a geographical unit. The district often was considered part of the larger northwest region of Mysia.

According to Homer's Odyssey, Odysseus, after his stay with the Cyclopes, reached the floating island of Aeolia, where Aeolus son of Hippotas provided him with the west wind Zephyr.[3]

The most celebrated of the cities was Smyrna (modern Izmir, Turkey), but in 699 BC, Smyrna became part of an Ionian confederacy. This league or confederation, known as the Ionian League, also called the Panionic League, was formed at the end of the Meliac War in the mid-7th century BC.[5]

Croesus, king of Lydia (reigned 560-546 BC), conquered the remaining cities. Later they were held successively by the Persians, Macedonians, Seleucids, and Pergamenes.[6]

Arrian[7] writes....Alexander's Speech....I (Alexander) started from the country which could not decently support you, and forthwith laid open to you the passage of the Hellespont, though at that time the Persians held the sovereignty of the sea. Having overpowered the viceroys of Darius with my cavalry, I added to your empire the whole of Ionia, the whole of Aeolis, both Phrygias and Lydia, and I took Miletus by siege. All the other places I gained by voluntary surrender, and I granted you the privilege of appropriating the wealth found in them....Ion is the Hebrew Javan without the vowel points. In the Persian name for the Greeks Iaones, one of these vowels appear. [8]....Larger Phrygia formed the western part of the great central table-land of Asia Minor. Smaller Phrygia was also called Hellespontine Phrygia, because it lay near the Hellespont. [9]

Attalus III, the last king of Pergamum, bequeathed Aeolis to the Roman Republic in 133 BC. Shortly afterwards it became part of the Roman province of Asia. At the partition of the Roman Empire (395 AD), Aeolis was assigned to the East Roman (Byzantine) empire and remained largely under Byzantine rule until the early 15th century, when the Ottoman Turks occupied the area.[10]

Ch 1.18 Alexander marches to Miletus and Occupies the Island of Lade

Arrian[11] writes.... Men now came to him both from Magnesia[1] and Tralles, offering to surrender those cities; and to them he sent Parmenio, giving him 2,500 infantry from the Grecian auxiliaries, an equal number of Macedonians, and about 200 of the Cavalry Companions. He also sent Lysimachus, son of Agathocles,[2] with an equal force to the Aeolic cities,[3] and to as many of the Ionic cities[4] as were still under the Persians. He was ordered to break up the oligarchies everywhere, to set up the democratical form of government, to restore their own laws to each of the cities, and to remit the tribute which they were accustomed to pay to the foreigners. But Alexander himself remained behind at Ephesus, where he offered a sacrifice to Artemis and conducted a procession in her honour with the whole of his army fully armed and marshalled for battle.[5]

On the following day he took the rest of his infantry, the archers, the Agrianians, the Thracian cavalry, the royal squadron of the Companions, and three other squadrons in addition, and set out for Miletus. At his first assault he captured that which was called the outer city; for the garrison had evacuated it. There he encamped and resolved to blockade the inner city; for Hegesistratus, to whom the king Darius had entrusted the command of the garrison in Miletus, kept on sending letters before this to Alexander, offering to surrender Miletus to him. But then, having regained his courage from the fact that the Persian fleet was not far off, he made up his mind to preserve the city for Darius. But Nicanor, the commander of the Grecian fleet, anticipated the Persians by sailing into the port of Miletus three days before they approached; and with 160 ships he anchored at the island of Lade, which lies near Miletus.[6] The Persian ships arriving too late, and the admirals discovering that Nicanor had occupied the anchorage at Lade before them, they took moorings near Mount Mycale.[7] Alexander had forestalled them in seizing the island, not only by mooring his ships near it, but also by transporting into it the Thracians and about 4,000 of the other auxiliary troops. The ships of the foreigners were about 400 in number.

Notwithstanding the superiority of the Persian fleet, Parmenio advised Alexander to fight a sea-battle, expecting that the Greeks would be victorious with their fleet both for other reasons and especially because an omen from the deity made him confident of the result; for an eagle had been seen sitting upon the shore, opposite the sterns of Alexander's ships.[8] He also urged that if they won the battle, they would reap a great advantage from it in regard to their main object in the war; and if they were beaten, their defeat would not be of any great moment; for even as it was, the Persians held the sovereignty of the sea. He added that he was willing to go on board the fleet himself and to share the danger. However, Alexander replied that Parmenio was mistaken in his judgment, and did not explain the sign according to probability. For it would be rash for him with a few ships to fight a battle against a fleet far more numerous than his own, and with his unpractised naval force to contend against the disciplined fleet of the Cyprians and Phoenicians. Besides, he did not wish to deliver over to the foreigners on so unstable an element the advantage which the Macedonians derived from their skill and courage; and if they were beaten in the seabattle, their defeat would be no small hindrance to their final success in the war, both for other reasons, and especially because the Greeks, being animated with courage at the news of his naval defeat, would attempt to effect a revolution. Taking all these things into consideration, he declared that he did not think that it was a suitable time for fighting a sea-battle; and for his part, he expounded the divine omen in a different way. He admitted that the eagle was in his favour; but as it was seen sitting on the land, it seemed to him rather to be a sign that he should get the mastery over the Persian fleet by defeating their army on land.

2. Lysimachus was of mean origin, his father having been a serf in Sicily. He was one of Alexander's confidential body-guards, and on the death of the great king obtained Thrace as his portion of the dismembered empire. In conjunction with Seleuous he won the battle of Ipsus, by which he obtained a great part of Asia Minor. He ultimately acquired all the European dominions of Alexander in addition to Asia Minor; but in his eightieth year he was defeated and slain by Seleuous at the battle of Corus, B.C. 281. Sintenis was the first to substitute Lysimachus for Antimachus, the reading of the MSS. Cf. vi. 28 infra.

4. Thirteen in number, of which Miletus and Ephesus were the chief in importance.

5. For the celebrated interview of Alexander with Apelles at Ephesus, see Aelian (Varla Historia, ii. 3).

7. Famous for the victory won near it by Leotychides and Xanthippusover the Persians, B.C. 479.

Ch 3.22: Reflections on the Fate of Darius

Arrian[12] writes..... Alexander sent the body of Darius into Persis, with orders that it should be buried in the royal sepulchre, in the same way as the other Persian kings before him had been buried.[1] He then proclaimed Amminaspes, a Parthian, viceroy over the Parthians and Hyrcanians. This man was one of those who with Mazaces had surrendered Egypt to Alexander. He also appointed Tlepolemus, son of Pythophanes, one of the Companions, to guard his interests in Parthia and Hyrcania. Such was the end of Darius, in the archonship of Aristophon at Athens, in the month Hecatombaion.[2] This king was a man pre-eminently effeminate and lacking in self-reliance in military enterprises; but as to civil matters he never exhibited any disposition to indulge in arbitrary conduct; nor indeed was it in his power to exhibit it. For it happened that he was involved in a war with the Macedonians and Greeks at the very time he succeeded to the regal power[3]; and consequently it was no longer possible for him to act the tyrant towards his subjects, even if he had been so inclined, standing as he did in greater danger than they. As long as he lived, one misfortune after another was accumulated upon him; nor did he experience any cessation of calamity from the time when he first succeeded to the rule. At the beginning of his reign the cavalry defeat was sustained by his viceroys at the Granicus, and forthwith Ionia, Aeolis, both the Phrygias, Lydia, and all Caria[4] except Halicarnassus were occupied by his foe; soon after, Halicarnassus also was captured, as well as all the littoral as far as Cilicia. Then came his own discomfiture at Issus, where he saw his mother, wife, and children taken prisoners. Upon this Phoenicia and the whole of Egypt were lost; and then at Arbela he himself fled disgracefully among the first, and lost a very vast army composed of all the nations of his empire. After this, wandering as an exile from his own dominions, he died after being betrayed by his personal attendants to the worst treatment possible, being at the same time king and a prisoner ignominiously led in chains; and at last he perished through a conspiracy formed of those most intimately acquainted with him. Such were the misfortunes that befell Darius in his life-time; but after his death he received a royal burial; his children received from Alexander a princely rearing and education, just as if their father had still been king; and Alexander himself became his son-in-law.[5] When he died he was about fifty years of age.

1. The Persian kings were buried at Persepolis. See Diodorus, xvii. 71. Plutarch (Alex., 43) says that Alexander sent the corpse of Darius to his mother.

4. In 2 Kings xi. 4, 19 the word translated captains in our Bible is Carim, the Carians. These men formed the body-guard of the usurper Athaliah, who stood in need of foreign mercenaries. David had a bodyguard of Philistines and Cretans. The Carians served as mercenaries throughout the ancient world, as we learn from Thucydides, i. 8; Herodotus, i. 171; ii. 152; v. 111; Strabo, xiv. 2. The Lydians appear in the Bible under the name of Lud (Isa. lxvi. 19). Herodotus (i. 94) gives an account of the colonization of Umbria by the Lydians, from which sprung the state of the Etruscans. Hence Vergil (Aeneid, ii. 782) speaks of the "Lydius Tybris." See also Aeneid, viii. 479; Horace (Satires, i. 6, 1); Tacitus (Annals, iv. 55); Dionysius (Archaeologia Romana, i. 28).