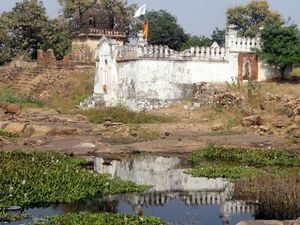 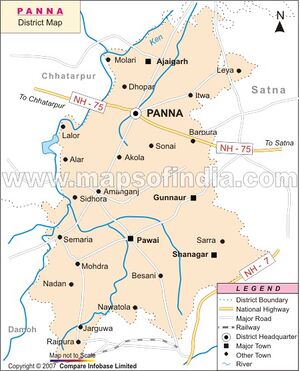 For other town of same name see Ajaigarh

Ajaigarh is a site of a fort, a town and tahsil in Panna district of Madhya Pradesh.

Dr Naval Viyogi[1] writes that Earlier Vakatakas (250-510 AD) estiblished their rule in Vindhya region. Bu later established authority over whole of Central India. From Vakataka inscriptions it is well established that A dynasty which took its name Vakataka came into existence about a century before Samudragupta 's conquests. The first king of the dynasty was Vindhyashakti (250–270). Second king was Pravarasena I (270–330).

[p.339]: Pravarasena I was son of Vindhyashakti, who not only performed four Asvamedhas but also assumed the title of Samriit.[3] He had a long reign, so much so that his eldest son Gautamiputra could not succeed him, but his grand-son Rudrasena I succeeded him. Gautamiputra himself was married to the daughter of the Bharsiva king Bhavanaga. The son of this union was Rudrasena I grand son of Pravarsena I and Bhavanaga. As, there was matriarchal system of heredity among the Nagas (Chapter V pp 102-03 and VI), hence Rudrasena I became the legal heir of throne of Bhavanaga in addition to throne of his own grand father Pravarsena I.[4] Rudrasena I was succeeded by his son Prithivisena I. Rudrasena II son of Prithivisena I was married to Prabhavati Gupta daughter of Chandra Gupta II born of the Empress Kubera Naga. Prabhavati Gupta ruled as regent after the death of her husband Rudrasena II, as guardian to her minor son Yuvraj Divakarsena and subsequently to another son called Damodarsena or Pravarasena.

It is obvious Vakataka dynasty took its root in Vindhya region and later extended its sways as far as Karnataka in South since Prithvisena subjugated the king of Kuntala a part of Karnataka and Kadamba kingdom. Their capitals were at Purika, Chanak, Pravarpur and Padmapur and Branches at Nandivardhan and Vatsagulma.

In Puranas they have been called Vindhyakas or royal family of Vindhyadesh. It is, therefore clear that they were original inhabitant of Vindhya Pradesh. The Vindhyakas or the Vakatakas used to live at the bank of river Kilkila or the country around it. This is a small river-near Panna, having a reputation for its unhealthy water. We are thus brought to very area, Ajaygarh Panna (Panna, Madhya Pradesh) where the earliest Vakatak inscriptions are found, that is the district of Ganj-Nachna. The Bhagwata Purana, is describing the Vidisa Nagas and Praviraka, calls the whole group The kila-kila kings. The location of dynasty in Bundelkhand is thus unanimous." 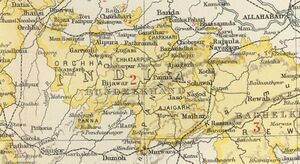 Panna district was created in 1950, shortly after Indian independence, from the territory of several former princely states of British India, including the states of Panna, Jaso, most of Ajaigarh, and a portion of Paldeo. Panna District was part of the new Indian state of Vindhya Pradesh, which was merged into Madhya Pradesh on 1 November 1956.

Panna was a Gond settlement until the 13th century. When the Gondi were defeated by the Chandelas they migrated to other parts of Madhya Pradesh. Until that date, there were many rulers of the area. The famous mandir of Padmavatipuri Dham, adorned with divine lustre, is located in Panna town at the centre of Vindhyachal in Madhya Pradesh.

Ajaigarh Town.- Chief town of the State of the same name in Central India, situated in 24° 54' N. and 80° I8' E., at the foot of the old fort. The modern capital is known as the Naushahr or 'new city,' and lies at the north end of the rock on which the fort stands. It is in no way remarkable, but has been much improved by the present chief. High above the town towers the great fort, one of those strongholds known traditionally as the Ath Kot, or ' eight forts,' of Bundelkhand, which, with the natural ruggedness of the country, long enabled the Bundelas to maintain their independence against the armies of the Mughals and Marathas. It was ultimately taken by Ali Bahadur of Banda in 1800 after a siege of ten months. In I803 Colonel Meiselbeck was sent to take possession, in accordance with the terms of a treaty with Ali Bahadur; but the Muhammadan governor was induced by one Lachhman Daowa, who had formerly been the governor under Bakht Singh, to make over the fort to him in return for a bribe of Rs. 18,000. On February 13, 1809, it was taken by Colonel Martindell after a desperate assault, Lachhman Daowa withdrawing.

The hill on which the fort stands, called the Kedar Parbat, is an outlier of Kaimur sandstone resting on gneiss, and rising 860 feet above the plain below, the fort being 1,744 feet above sea-level. The slope is gradual up to about 50 feet from the summit, where it suddenly becomes a perpendicular scarp, adding greatly to the defensive strength of the position. The name by which the fort is now known is comparatively speaking modern, and is not used in the numerous inscriptions found upon it, in which it is always called Jaya-pura-durga. Although it was undoubtedly built about the ninth century, and was always a place of importance, it is never mentioned by any Muhammadan historian except Abul Fazl, who merely records that it was the head-quarters of a mahal in the Kalinjar sarkar, and notes that it had a stone fort on a hill. Its present name is a corruption of Jaya-durga, through its synonym Jaya-garh, the legend ordinarily given, which accounts for its foundation by one Ajaipal of the Chauhan house of Ajmer, being a modern invention. The battlements of the fort follow the top contour of the hill, and have the form of a rough triangle 3 miles in circuit. It was formerly entered by five gates, but three are now blocked up. The rampart, which never has the same dimension in height, breadth, or depth for three yards running, is composed of immense blocks of stone without cement of any kind, the parapet upon it being divided into merlons resembling mitres. Muhammadan handiwork is apparent in the numerous delicately carved stones from Jain temples which have been inserted into the walls. Many tanks exist on the summit and sides of the hill, several giving a good supply of pure water. The ruins of three Jain temples are still standing. They are built in twelfth-century style, very similar to those at Khajuraho. The stones are richly carved with fine designs, and the temples must once have been magnificent specimens of their class. Countless broken remains of idols, pillars, cornices, and pedestals lie strewn around, while several inscriptions of the later Chandel period, dating from ir4r to 1315, have been discovered in the buildings.

The sides of the hill and all the surrounding country are covered with a thick forest of teak and tendu (Diospyros tooentosa), which adds to the wild picturesqueness of the scene. The town contains a primary school, a British post office, and a dispensary. [A. Cunningham, Archaeological Survey Reports, vol. vii, p. 46; vol. xxi, p. 46.]

Ajaigarh State was the capital of a princely state of the same name during the British Raj. Ajaigarh was founded in 1765 by Guman Singh, a Bundela Rajput who was the nephew of Raja Pahar Singh of Jaitpur State. After Ajaigarh was captured by the British in 1809, it became a princely state in the Bundelkhand Agency of the Central India Agency. The rulers bore the title of sawai maharaja. The chief resided at the town of Nowgong, at the foot of the hill-fortress of Ajaigarh, from which the state took its name. This fort, situated on a steep hill, towers more than 800 ft (244 m) above the eponymous township, and contains the ruins of several temples adorned with elaborately carved sculptures.

Panna was the capital of Chhatar Sal, the Bundela Rajput leader who led a revolt against the Mughal Empire. Upon his death in 1732, his kingdom was divided among his sons, with one-third of the kingdom going to his ally, the Maratha Peshwa Baji Rao I.

The Kingdom of Panna went to Harde Sah, the eldest son of Chhatar Sal. In the early 19th century, Panna became a princely state of British India, and gained control states of the states of Nagod and Sohawal. Raja Nirpat Singh assisted the British in the Revolt of 1857, and the British rewarded him with the title maharaja. Maharaja Mahendra Yadvendra Singh acceded to the Government of India on January 1, 1950, and the kingdom became Panna District of the new Indian state of Vindhya Pradesh. Vindhya Pradesh was merged into Madhya Pradesh on November 1, 1956.

Col. G. B. Malleson[5] writes that Ajaigarh, Raja of, originally styled Raja of Banda. state was comprised originally in the kingdom of Jaitpur, left square miles, and the population 67,500.

The present Raja, Narpat Singh, is fifth son in descent from (p.362) to Juggut Raj by his father, Chattar Sal. But the dominions of Juggut Raj were dissevered by internal wars, and his descendant, Bukht Singh, was reduced to such indigence that in the latter part of the reign of Ali Bahadur, he was constrained to accept from that sovereign a pittance of two rupees per diem. His condition improved on the occupation of Bundelkhand by the British, and in 1807 he received a sunnud restoring to him a portion of his ancestral possessions. The present chief, Ranjur Singh, is the fourth in descent from Bukht Singh. The area of his territory is 340 square miles, the population 50,000, and the revenue 1,75,000 rupees. He has received the right of adoption.