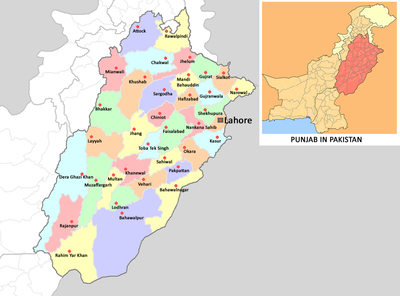 Pakpattan (पाकपत्तन) ,'the ferry of the pure ones', is a city and district in the Punjab province of Pakistan.

The ancient town of Ajudhan or Pakpatan, is situated on the high bank of the old Satlej, 28 miles to the south-west of Depalpur Pakistan, and 10 miles from the present course of the river. It lies on the left bank of the Indus river.

Hukum Singh Panwar (Pauria)[2] writes that its ancient name was Ajudhin or Ayodhin, which has been identified as the original Ayodhya of the Rigvedic times.

Pakpattan District was located in agricultural belt of the region with forest areas during the period of Indus Valley Civilization. The Vedic period is characterized by Indo-Aryan culture that came with Aryans from Central Asia and settled in the Punjab . The Kambojas, Daradas, Kaikayas, Madras, Pauravas, Yaudheyas, Malavas and Kurus invaded, settled and ruled ancient Punjab region.

After overrunning the Achaemenid Empire in 331 BCE, Alexander marched into present-day Punjab region with an army of 50,000. The Pakpattan was ruled by Maurya Empire, Indo-Greek kingdom, Kushan Empire, Gupta Empire, White Huns, Kushano-Hephthalites and Shahi kingdoms.

In 997 CE, Sultan Mahmud Ghaznavi, took over the Ghaznavid dynasty empire established by his father, Sultan Sebuktegin, In 1005 he conquered the Shahis in Kabul in 1005, and followed it by the conquests of Punjab region. The Delhi Sultanate and later Mughal Empire ruled the region. The Punjab region became predominantly Muslim due to missionary Sufi saints whose dargahs dot the landscape of Punjab region.

After the decline of the Mughal Empire, the Sikh invaded and occupied Pakpattan District.

Pakpattan is the city of the great Saint Baba Farid of Chisti. Word Pakpattan is consist of two words "pak" and "pattan" meaning "clean dockland" (Pattan means a dockland or place where ships or boats stop). The city is given this name by Saint Baba Farid. It is said, once Saint Farid having ablution on the bank of the River Sutlej. One local man told the Saint that this water is unclean and place is dirty then Saint Farid replied to him "no its clean water and place' in local language "Pak Pattan'.

Alexander Cunningham[4] writes that The ancient town of Ajudhan or Pakpatan, is situated on the high bank of the old Satlej, 28 miles to the south-west of Depalpur Pakistan, and 10 miles from the present course of the river.

Its foundation is assigned to a Hindu saint, or raja, of the same name, of whom nothing else is recorded. This part of the Doab is still known as Surāt-des, a name which recalls the Surakousae of Diodorus, and the Sudrakae and Oxudrakae of other Greek writers. Now, the Sudrakae are always coupled with the Malli by classical authors, just as Ajudhan and Multan are joined together by the Muhammadan historians. I think, therefore, that we may look upon Ajudhan and its neighbour Depalpur Pakistan as two of the chief cities of the Sudrakas, or Surakas, who, in the time of Alexander, were one of the free nations of India. Dionysius and Nonnus use the form of Hudarkae, Pliny has Sydrakae, which agrees with Strabo's Sudrakae ; and Diodorus has Surakousae. Arrian and Curtius alone give Oxudrakae. Strabo adds that they were said

[p.215]: to be descendants of Bacchus;1 and as Chares of Mytilene states that the name of the Indian god Σοροάδεως meant οινοποώς, or the "Wine-bibber," I infer that the people who boasted a descent from Bacchus may have called themselves Surakas, or Bacchidae. The d in Sudrakae I look upon as a redundant addition of the Greeks, which is also found in the Adraistae of Arrian and the Andrestae of Diodorus. The Sanskrit name of this people was Arashtraka, or "the Kingless," which is well preserved in Justin's Arestae. Surakai, or the descendants of Sura, must therefore be the true Greek form. This is confirmed by the longer form of the name given by Diodorus as Sυρακονσαι, which is most probably derived from the Sanskrit sura, "wine," and kusa, "mad, or inebriated." It would thus mean simply the " drunkards," a nickname which was no doubt given by their Arian neighbours, who were very liberal in their abuse of the Turanian population of the Panjab.

Thus the Kathaei of Sangala are stigmatized in the Mahabharata as "thieving Bahikas," as well as "wine-bibbers " and " beef eaters, "2 They are also called by a variety of names, as Madra, Bahika, Aratta, and Jarttikka, and not even once by their own proper name, which, as we know from Alexander's historians, was Kathaei, which is still preserved in the Kathi of the present day. I confess, therefore, that I look upon many of the ethnic appellations which the Greeks have handed down to us as mere nicknames, or abusive epithets applied by the Brahmanical Arians to their Turanian neighbours. For instance, the name of

Kambistholi, which. Arrian1 gives to a people on the Hydraotes, or Ravi River, is most probably derived from the Sanskrit Kapisthala, that is, "Wine-land, or the Tavern," which would be a natural epithet for the country of the Surākusas, or " wine-bibbers." Similarly I would explain Oxudraka as Asuraka, or the " Demons."

The doubt now arises whether Suraka' or " the drinkers," can have been the true name of this people. Arrian2 places the Oxudrakae; at the junction of the Hydaspes and Akesines, where Curtius locates the Sobii, Diodorus the Ibae, and Strabo the Sibae. The only explanation of this discrepancy that I can suggest is, the probable confusion between the name of Sobii, or Chobiya, of Ferishta,3 and that of Sorii, or Suraka. The former was the name of the subjects of Sopeithes, or Sophytes, whose rule extended over the Salt Range of mountains above the junction of the Hydaspes and Akesines. The latter name I would refer to Shorkot, which I have already identified with Alexandria Soriane. It is still the capital of the district of Shor, which lies just below the junction of the Hydaspes and Akesines. The Sobii, therefore, were the immediate neighbours of the Sorii, the former people occupying the country above the confluence of the rivers, and the latter the country just below it.

This location of the Sorii, or Surakas, explains the statement of Arrian4 that the Kathaei were allies of the Oxudrakae and Malii. They were neighbouring nations, who were generally at war with each other, but were always ready to join against a common enemy.

[p.217]: Pliny places the limit of Alexander's career in the territory of the Sudrakas, " in Sudracis expeditio Alexandri termino,"1 and the altars on the opposite bank of the Hyphasis, or Bias river. From this point to the river Sydrus, that is the Hesidrus, or Satlej, he makes the distance 168 Roman, or 154 British miles ; and from the Sydrus to the Jomanes, or Jumna, exactly the same. But as the whole distance from the Bias to the Jumna varies from 150 to 160 miles, from the foot of the hills down to Kasur on the former river, and down to Karnal on the latter river, I presume that only one distance, namely, that from the Bias to the Jumna, was stated in Pliny's original authority. The famous spot on the eastern bank of the Hyphasis, where " Alexander halted and wept,"2 must have been somewhere in the low ground between the Satlej and the Bias, at a short distance above the old junction opposite Kasur and Bazidpur. For 20 miles above this point the courses of the two rivers ran almost parallel, and within a few miles of each other, from the earliest times down to A.D. 1796, when the Satlej suddenly changed its course, and joined the Bias above Hari-ki-patan. "Within this range of 20 miles the space between the two rivers was so small that it might easily have been overlooked in stating the distance from Alexander's camp to the Jumna. I believe, however, that it was actually noted by Alexander's contemporaries, for Pliny, after stating the distance to the Jumna, says, " some copies add five miles more."3

2 Gibbon, 'Decline and Fall of the Roman Empire:' "On the eastern bank of the Hyphasis, on the verge of the desert, the Macedonian hero halted and wept."

[p.218]: Xow these five Roman miles are the exact distance of the old bed of the Satlej from the eastern bank of the Bias, a measurement which some of the ancient writers may have omitted to note as a matter of little importance. On a general review of all the data, I think that the site of Alexander's altars must be looked for along the line of the present course of the Satlej, at a few miles below Hari-ki-patan, and not far from the well-known field of Sobraon, which is barely five miles distant from several bends of the old bed of the Satlej. To this point, therefore, the territory of the Sudrakae, or Surakas, must have extended in the time of Alexander.

For many centuries Ajudhan was the principal ferry on the Satlej. Here met the two great western roads from Dera Ghazi Khan and Dera Ismail Khan ; the first via Mankera, Shorkot, and Harapa ; the second via Multan. At this point the great conquerors Mahmud and Timur, and the great traveller Ibn Batuta, crossed the Satlej. The fort is said to have been captured by Sabuktugin in A.H. 367, or A.D. 977-78, during his plundering expedition in the Punjab ; and again by Ibrahim Ghaznavi, in a.h. 472, or A.D. 1079-80. On the invasion of Timur, the mass of the population fled to Bhatner, and the few people that remained were spared by that ruthless barbarian out of respect for the famous saint Farid-ud-din Shakar-ganj, whose shrine is in Ajudhan. From this saint the place derives its modern name of Pak-pattan, or the " Ferry of the Pure One," that is, of Farid, whose latter days were spent at Ajudhan. By continued fasting his body is said to have become so pure that whatever he put into his mouth to allay the cravings of hunger, even earth

and stones, was immediately turned into sugar, whence his name of Shakar-ganj, or " Sugar-store." This miraeulous power is recorded in a well-known Persian couplet : —

which may be freely rendered : —

" Stones in his hand are changed to money (jewels), And poison in his mouth to honey (sugar)."

From another memorial couplet we learn that he died in A.H. 664, or A.D. 1265-66, when he was 95 lunar years of age. But as the old name of Ajudhan is the only one noted by Ibn Batuta in A.D. 1334, and by Timur's historian in A.D. 1397, it seems probable that the present name of Pak-pattan is of comparatively recent date. It is, perhaps, not older than the reign of Akbar, when the saint's descendant, Nur-ud-din, revived the former reputation of the family by the success of his prayers for an heir to the throne.

Administration- The district is divided into two tehsils: Arifwala and Pakpattan.