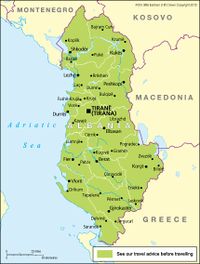 Albania (officially the Republic of Albania) (Albanian: Republika e Shqipërisë), is a country in South-eastern Europe. The country spans 28,748 square kilometres (11,100 square miles) and had a total population of 3 million people as of 2016. It is a unitary parliamentary constitutional republic with the capital in Tirana, the country's most populous city and main economic and commercial centre. The country's other major cities include Durrës, Vlorë, Sarandë, Shkodër, Berat, Korçë, Gjirokastër and Fier.

Albania lies in the southwestern portion of the Balkan Peninsula bordered by Montenegro to the northwest, Kosovo to the northeast, the Republic of Macedonia to the east, and Greece to the south and southeast. Most of the country is mountainous, including the Albanian Alps in the north, the Korab Mountains in the east, the Ceraunian Mountains in the south and the Skanderbeg Mountains in the center. The country's coast touches the Adriatic Sea to the northwest and the Ionian Sea to the southwest including the Albanian Riviera. It is less than 72 km (45 mi) from Italy across the Strait of Otranto that connects the Adriatic to the Ionian.

Mother Teresa, the Nobel Prize winner, was born in Albania. She spent most of her life in Calcutta, India, where she established the Missionaries of Charities trust.