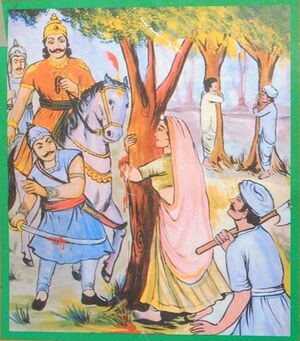 Amrita Devi (Beniwal) sacrificed her life along with her three daughters viz. Asu, Ratni and Bhagu in year 1730 to save green trees being felled by the Maharaja of Jodhpur at a place known as Khejarli in Marwar, Rajasthan. Along with her more than 363 other Bishnois, died saving the Khejri trees.

Khejarli or Khejadli is a village in Jodhpur district of Rajasthan, India. The name of the town is derived from Khejri (Prosopis cineraria) trees, which were in abundance in the village. In this village 363 Bishnois had to sacrifice their lives in 1730 AD for protecting green trees.

Beginning of the Chipko ---Save Trees-- movement 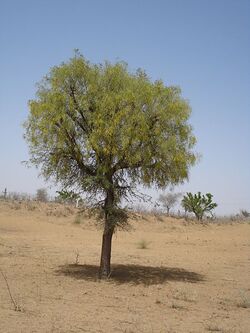 It is the place where Chipko movement originated in India. It was a Tuesday, black Tuesday in Khejadli. 10th day of the bright fortnight of the month Bhadra (Indian lunar Calendar) in 1730 A.D. Amrita Devi a mother of three daughters viz. Asu, Ratni and Bhagu bai was at home with her daughters. Suddenly, she came to know that many people had descended in their otherwise sleepy village. It was a party of Maharaja Abhay Singh, Ruler of Marwar (Jodhpur) state who wanted to fell green Khejri (Prosopis cineraria) trees to burn lime for the construction of his new palace. Since there was a lot of greenery in the Bishnoi villages even in the middle of Thar Desert, the king ordered his men to get the woods from Khejri trees.

Amrita Devi protested against King's men attempting to cut green trees as it was prohibited in Bishnoi religion. The malevolent feudal party told her that if she wanted the trees to be spared, she should give them money as bribe. She refused to acknowledge this demand and told them that she would consider it as an act of ignominy and insult to her religious faith. She said that she would rather give away her life to save the green trees. It is at that stage she spoke these words:

Meaning: If a tree is saved even at the cost of one's head, it's worth it.

Saying these words, she offered her head! The axes, which were brought to cut the trees, severed her head from her trunk. The three young girls Asu, Ratni and Bhagu were not daunted, and offered their heads too!!

The news spread like wildfire. Bishnois gathered and sent summons to 83 Bishnoi villages to come and decide on the next course of action. Since the supreme sacrifice by those four had not satisfied the royal party, and the felling of green trees was continued, it was decided that for every green tree to be cut, one Bishnoi volunteer would sacrifice his/ her life. In the beginning, old people voluntarily started holding the trees to be cut in an embrace as in the Chipko movement of 20th Century in Uttar Pradesh (India). 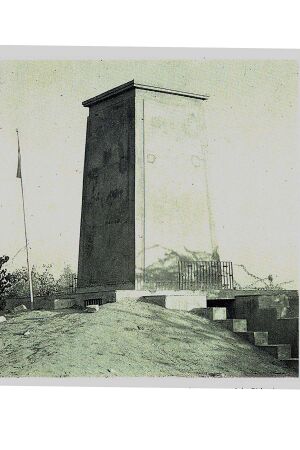 Cenotaph of Martyrs at Khejarli

In this way many valiant old persons gave away their lives, but it failed to have the desired impact. Moreover, the Hakim (Royal party's leader) taunted the Bishnois that in this manner they were offering unwanted old persons. Soon, young men, women, including recently married ones and children were sacrificing themselves in a similar manner.

There was intense pandemonium. It completely shook the tree-felling party, headed by their leader Girdhar Das Bhandari (Hakim), they left for Jodhpur with their mission unfulfilled and told the Maharaja about what had happened. As soon as he learnt it, he ordered stoppage of the felling of trees.

The Government of Rajasthan and Madhya Pradesh, Department of Forest, have started the prestigious state level Amrita Devi Vishnoi Smriti Award for excellent contribution to the protection and conservation of wild animals. Award consists of cash Rs 25000/- and a prashasti.