Ananta (अनन्त) or Anantadeva (r.1028-1063,d.1081) was a King of Kashmir. Samgrāmarāja's son, Harirāja, succeeded him but reigned for only 22 days before dying and being succeeded in turn by another son, Ananta. Anantadeva committed suicide in 1081 and his son Kalasha succeeded him.

Ananta in the Genealogy of Nara 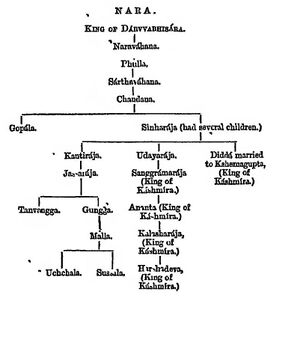 Genealogy of Nara, King of Darvabhisara

It was around this time that Vigraharaja of Kashmira attempted once more to take control of Kashmir, taking an army to do battle near to the capital at Srinagar and being killed in defeat. The period of rule by Ananta was characterised by royal profligacy; he accumulated debts so large that it necessitated the pawning of the royal diadem, although when his queen, Sūryamatī, intervened the situation was improved. She was able to settle the debts incurred by her husband by use of her own resources and she also oversaw the appointment of ministers with ability in order to stabilise the government. In 1063, she forced Ananta to abdicate in favour of their son, Kalasha. Anantadeva committed suicide in 1081.

Rajatarangini[3] mentions that ....The queen mother Shrilekha was ambitious of reigning and went to the coronation-bath, every thing being ready for the ceremony. But in the meantime the Ekanggas joined by Sāgara son of the king's nurse, coronated the boy Anantadeva brother of the late king. The queen only reaped the sin of murdering her child for the kingdom, while another enjoyed it. Even as the serpent who is robbed of its jewel by one, reaps only sin, by stinging to death another with whom the stone is lodged. Her disappointment was so great that she forgot her affection for her son. Fie to the craving for enjoyment !

Vigraharaja, the aged uncle (father's brother) of the new king approached the kingdom to usurp it. He brought a powerful army from Lohara, and within two and half days entered the capital after having burnt the gate when it was carelessly guarded. But when within the temple of Lothika, he and his followers were killed by the army sent by Shrilekha. She then built two temples for the benefit of her husband's and son's souls, and again rose in rebellion.

In the meantime the king grew up and, — a king from his very infancy, — he indulged in costly habits, &c.

[p.179]: Rudrapala, and other sons, of Shahi became his favorites, and obtained large salaries from the revenue of the kingdom. Still Rudrapala remained a, beggar as he was, though paid one and half lacs daily while Diddapala was happy with eighty thousand a day. Ananggapala the Vetala was also fed by the king ; he thought of uprooting the statue of Sarasvati. Rudrapala was the protector of the thieves and Chandalas who plundered and killed men. The Kayasthas, under the protection of Rudrapala, began to oppress the subjects. Utpala and others built a house for the blind. Rudrapala married A'samati the beautiful and oldest daughter of Induchandra king of Jalandhara (Jallender). She built a temple at Tripureshvara. Her younger sister Suryyamati somewhat less beautiful than she, was married by Rudrapala to the king. This man gave bad advices to his sovereign though his advices were pleasing to the ear.

At this time Tribhuvana the powerful lord of Kampana came with the Damaras to usurp the kingdom. Though a large part of the royal army joined the rebel, the cavalry and the Ekanggas remained faithful to the king. In the battle which ensued the gallant king evaded his enemy's blow and struck Tribhuvana. Though protected with a strong iron mail which saved his life, Tribhuvana vomited blood, and fled.

The king, as he moved over the battle field, his body covered with mangled flesh and blood and using his sword as a stick, was a terror to his foes.

[p.180]: He saw on the battle field the wounded Ekanggas who were named to him one after another, he was touched with pity, and relieved their anxiety as regards the gratuity due to them for their wounds. The grateful king bestowed ninety-six kotis of Dinnaras on them. And so great was the king's magnanimity that he gave some money even to Tribhuvana. The king held his sword so firmly during the battle, that he could not let go his hold when the battle was over, but after long milk-fomentation.

The king made his friend Brahmaraja treasurer, but he excited the jealousy of Rudrapala and consequently had to retire. He then joined the seven Mlechchha kings and the Damaras, and placing the king of Darad at their head entered Kashmira. When they arrived at the village Kshiraprishta, the gallant Rudrapala went out to fight with them. It was settled that the battle was to commence the next day, and the lord of Darad went into the house of Kridapindaraka the Naga. There contrary to the advice of those around him, he threw his bayonet (Kunta) on a fish that was floating in the water, whereupon there arose from the place a serpent, having the body of a jackal, and the lord-- of Darad chased it. His army saw him run, and thought that the engagement of fighting on the succeeding day had been violated, and appreheuding an attack from tho enemy, rushed to battle. In the battle which raged, the lord of Darad lost his head, and the fame of Rudrapala increased. The

[p.181]: Mlechchha kings were killed or imprisoned, and the king of Kashmira obtained gold and jewels. Rudrapala brought to his master the head of the king of Darad with crown adorned with pearls, Udayanavatsa brother of the deceased, caused magic to be performed by the Brahmanas and Rudrapala died of Luta. The other sons of Shahi were also soon removed.

When the Palas the favorites of the king were dead, Sūyyamatī became, his most beloved. This queen other-wise called Sabhata set up a Shiva on the banks of the Vitasta, and a temple called Subhatamatha, and at the time of sanctifying the god and temple she removed the poverty of many Brahmanas by bestowing on them cows, horses, gold and jewels. By its side she built a village for Brahmanas, with a temple, and named the village after that of A'shachandra alias Kallana, her younger brother whom she loved. By it she erected two other temples to Vijayesha and Amaresha and called them after the names of Sillana her another brother, and of her husband. In Vijayeshvara she gave one hundred and eight villages inhabited by Brahmanas to holy and learned Brahmanas. In Amareshvara she bestowed (on Brahmanas) villages inhabited by the same caste people, and called after her husband ; and she erected Trisula, Vanalingga and other images of Shiva. When their son Rajaraja died, both the king and the queen left the palace and lived near the, temple of Sadashiva. From this time the

[p.182]: ancient palace of kings was deserted and all the succeeding kings dwelt near this temple.

The grooms of the king's stable became rich, partly by royal gifts, for the king loved horses, and partly by . plunder.

There was one Dallaka, the Daishika who was a great jester and favorite of the king. This was the man through whom Bhoja king of Malava built a golden tank, and it was through him that he fulfilled his resolution to wash his face always with the waters from the shrine of Papasudana. He too robbed the people.

He used to prepare betels with perfumes, and the king gave him almost all his riches. The king, for the further payment of this man's dues, mortgaged to him, rich as he was now, the throne and crown marked with the design of peacock's tail. Every month these things were brought from the betel man's house on the day of worship. At last the king stopped these excesses by giving charge of his treasury to bis queen Suyyamati. The fear caused by the grooms and Dallaka subsided at once, and the kingdom once more enjoyed peace.

Rajatarangini[4] mentions that There was one Dallaka, the Daishika who was a great jester and favorite of the king of Kashmir Anantadeva. This was the man through whom Bhoja king of Malava built a golden tank, and it was through him that he fulfilled his resolution to wash his face always with the waters from the shrine of Papasudana. (VII,p.182)

Rajatarangini[5] tells us that ....The king (Anantadeva) fell into difficulties several times by suddenly entering foreign kingdoms without previous advice or plan. Once at Vallapura where his army was reduced in an attack on Kalasha son of Tukka, he was rescued from danger by the device of Haladhara. (VII,p.184)

Rajatarangini[6] mentions that king of Kashmir Anantadeva (1028-1063) and his contemporary king Bhoja were both renowned for charity and learning and for being alike friends to the poets. King Ananta made Tanvanggaraja (his father's brother's son) the guardian of his grandson. This Tanvangga enlarged the kingdom of his ward, and when he grew up, returned to Kashmira and died at Chakradhara. (VII,p.186)

Rajatarangini[7] mentions Thakkana, who were supporters of the old king Anantadeva father of King Kalasha of Kashmir. (VII:p.200)

Rajatarangini[8] tells us ....The king Sussala became angry with Tilakasimha, despoiled him of his possession and made Ananda lord of Dvara. This person was born at Parnotsa and was master of Ananta. Somapala and other ministers were at that time much admired ; for though the king was there, yet they did not come to him. In the year 95, in the month of Vaishakha, the king returned to his country, and Nagapala, driven from his kingdom, followed him. (p.54)

Rajatarangini[9] tells us ....The very powerful Prithvihara who stationed himself on a level plain covered with trees and bordering on the mountains came out and defeated the royal army. Ananda, lord of Dvara, of the line of Ananta, Kāka and Tilakasimha ; — these three who had once fled from battle were made ministers. (p.61)

Rajatarangini[11] tells.... On that day Ananta's son, Ananda the great, was killed by the Damaras at Lochanoḍḍāraka while on his march. He did many good acts and could undergo hard labor. [VIII(i),p.122]