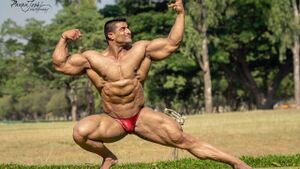 Anuj Kumar Taliyan is an Indian Army Havildar serving in the the Madras Engineer Group, and India's top–ranking professional bodybuilder in his weight category.

Serving in the Indian Army

He has been serving in the Madras Engineer Group of the Indian Army since 2010.[1]

In 2018, he won a gold medal in the 100 plus kg category, in the Senior National Body Building Championship, held at Pune, India.

Later, in the Services Championship 2018, he also won two gold medals at the national level.[1]

In November 2019, he won a gold medal in the 100 plus kg category, in the 11th World Bodybuilding Championship, held at Jeju Island, South Korea.[1]