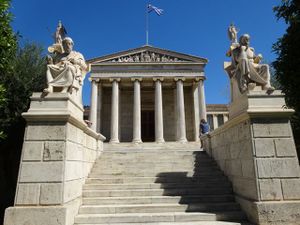 Athens (एथेन्स) is the capital and largest city of Greece. It dominates the Attica region and is one of the world's oldest cities, with its recorded history spanning over 3,400 years, and its earliest human presence starting somewhere between the 11th and 7th millennia BC.

Classical Athens was a powerful city-state that emerged in conjunction with the seagoing development of the port of Piraeus, which had been a distinct city prior to its 5th century BC incorporation with Athens. A centre for the arts, learning and philosophy, home of Plato's Academy and Aristotle's Lyceum, it is widely referred to as the cradle of Western civilization and the birthplace of democracy, largely because of its cultural and political impact on the European continent, and in particular, the Romans.

In modern times, Athens is a large cosmopolitan metropolis and central to economic, financial, industrial, maritime, political and cultural life in Greece. Athens has two UNESCO World Heritage Sites : the Acropolis of Athens and the medieval Daphni Monastery. Athens has also been the venue of Olympic games in 2004. 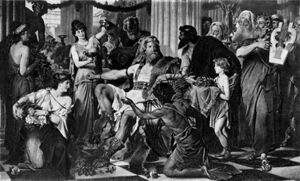 Alaric in Athens by Ludwig Thiersch, 1894

Alaric struck first at the eastern empire. He marched to the neighborhood of Constantinople but, finding himself unable to undertake a siege, retraced his steps westward and then marched southward through Thessaly and the unguarded pass of Thermopylae into Greece.

The armies of the eastern empire were occupied with Hunnic incursions in Asia Minor and Syria. Instead, Rufinus attempted to negotiate with Alaric in person, which only aroused suspicions in Constantinople that Rufinius was in league with the Goths. Stilicho now marched east against Alaric. According to Claudian, Stilicho was in a position to destroy the Goths when he was ordered by Arcadius to leave Illyricum. Soon after, Rufinus' own soldiers hacked him to death. Power in Constantinople now passed to the eunuch Chamberlain Eutropius.

Rufinus' death and Stilicho's departure gave free rein to Alaric's movements; he ravaged Attica but spared Athens, which capitulated at once to the conqueror. In 396, he wiped out the last remnants of the Mysteries at Eleusis in Attica, ending a tradition of esoteric religious ceremonies that had lasted since the Bronze Age. Then he penetrated into the Peloponnesus and captured its most famous cities—Corinth, Argos, and Sparta -selling many of their inhabitants into slavery.

Here, however, his victorious career suffered a serious setback. In 397 Stilicho crossed the sea to Greece and succeeded in trapping the Goths in the mountains of Pholoe, on the borders of Elis and Arcadia in the peninsula. From there Alaric escaped with difficulty, and not without some suspicion of connivance by Stilicho, who supposedly had again received orders to depart. Alaric then crossed the Gulf of Corinth and marched with the plunder of Greece northward to Epirus. Here his rampage continued until the eastern government appointed him magister militum per Illyricum, giving him the Roman command he had desired, as well as the authority to resupply his men from the imperial arsenals.

It was probably in 401 that Alaric made his first invasion of Italy, originally with the intention to petition for a position closer to Rome. Alaric had a fascination for the 'golden age' of Rome and insisted on his tribesmen calling him 'Alaricus'.[2][3]

Arrian[4] writes... As soon as news of the calamity which had befallen the Thebans reached the other Greeks, the Arcadians, who had set out from their own land for the purpose of giving aid to the Thebans, passed sentence of death on those who had instigated them to render aid. The Eleans also received back their exiles from banishment, because they were Alexander's adherents; and the Aetolians, each tribe for itself, sent embassies to him, begging to receive pardon, because they also had attempted to effect a revolution, on the receipt of the report which had been spread by the Thebans. The Athenians also, who, at the time when some of the Thebans, escaping from the carnage, arrived at Athens, were engaged in celebrating the Great Mysteries,[1] abandoned the sacred rites in great consternation, and carried their goods and chattels from the rural districts into the city. The people came together in public assembly, and, on the motion of Demades, elected from all the citizens ten ambassadors, men whom they knew to be Alexander's special adherents, and sent them to signify to him, though somewhat unseasonably, that the Athenian people rejoiced at his safe return from the land of the Illyrians and Triballians, and at the punishment which he had inflicted upon the Thebans for their rebellion. In regard to other matters he gave the embassy a courteous reply, but wrote a letter to the people demanding the surrender of Demosthenes and Lycurgus, as well as that of Hyperides, Polyeuctus, Chares, Charidemus, Ephialtes, Diotimus, and Moerocles;[2] alleging that these men were the cause of the disaster which befell the city at Chaeronea, and the authors of the subsequent offensive proceedings after Philip's death, both against himself and his father.[3] He also declared that they had instigated the Thebans to revolt no less than had those of the Thebans themselves who favoured a revolution. The Athenians, however, did not surrender the men, but sent another embassy to Alexander,[4] entreating him to remit his wrath against the persons whom he had demanded. The king did remit his wrath against them, either out of respect for the city of Athens, or from an earnest desire to start on the expedition into Asia, not wishing to leave behind him among the Greeks any cause for distrust. However, he ordered Charidemus alone of the men whom he had demanded as prisoners and who had not been given up, to go into banishment. Charidemus therefore went as an exile to King Darius in Asia.[5]

1. The Great Mysteries of Demeter were celebrated at Eleusis, from the 15th to the 23rd of the month Boedromion, our September.

2.All these nine men were orators except Chares, Charidemus, and Ephialtes, who were military men. Plutarch (Life of Demosthenes, 23) does not mention Chares, Diotimus, and Hyperides, but puts the names of Callisthenes and Damon in the list.

4. At the head of this embassy was Phocion.

5. He was put to death by Darius shortly before the battle of Issus, for advising him not to rely on his Asiatic troops in the contest with Alexander, but to subsidize an army of Grecian mercenaries. See Curtius, iii. 5; Diodorus, xvii. 30.