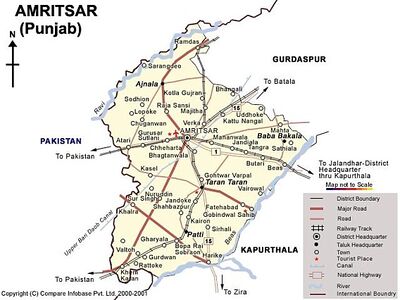 Attari on Map of Amritsar district

Atari(Hindi: अटारी; Punjabi: ਅਟਾਰੀ) is a village in Punjab located on the Grand Trunk Road between Lahore and Amritsar.

Atari is the border check-post on India-Pakistan border, generally known as "Atari Border", about 30 kilometres away from Amritsar railway station. There is also a railway station in Atari.

[p.228]: The third city captured by Alexander in his campaign against the Malli is described in similar terms by all the historians. According to Arrian1 " Alexander then led his army against a certain city of the Brachmani, where he heard another body of the Malli had fled." The garrison " abandoned the city and fled to the castle," which being stormed they set fire to their houses, and perished in the flames. "About 5000 of them fell during the siege, and so great was their valour that few came alive into the enemy's hands." Both Curtius2 and Diodorus3 mention the fire, and the stout defence made by the garrison, which the latter author numbers at 20,000 men, of whom 3000 only escaped by taking refuge in the citadel, where they capitulated. Curtius also states that the citadel was uninjured, and that Alexander left a garrison in it.4

All these accounts agree very well with the position and size of the old ruined town and fort of Atari, which is situated 20 miles to the west-south-west of Tulamba, and on the high-road to Multan. The remains consist of a strong citadel 750 feet square and 35 feet high, with a ditch all round it, and a tower in the centre 50 feet high. On two sides are the remains of the town forming a mound 20 feet high, and 1200 feet square, the whole being a mass of ruin 1800 feet m length, and 1200 feet in breadth. Of its history there is not even a tradition, but the large size of the bricks

[p.229]: is sufficient to show that it must be a place of considerable antiquity. The name of the old city is quite unknown. Atari is simply that of the adjacent village, which is of recent origin, having been established by a member of the Atariwala family of Sikhs. But judging from its size and strength, and its very favourable position between Tulamb and Multan, I think that the ruined mound of Atari has a very good claim to be identified with the strong city of the Brahmans which made so stout a defence against Alexander.

Curtius adds some particulars about this city, which are not even alluded to by either Arrian or Diodorus ; but they are still deserving of consideration, as they may perhaps be founded on the statements of one of the companions. He states that Alexander " went completely round the citadel in a boat," which is probable enough, as its ditch was no doubt capable of being filled at pleasure with water from the Ravi, as was actually the case with the ditch of Multan. Now the old citadel of Atari is still surrounded by a ditch which could easily have been filled from some one of the old canals that pass close by the place. The number of these canal beds is most remarkable ; I counted no less than twelve of them in close parallel lines immediately to the west of Atari, all of them drawn from the old bed of the Ravi to the south of Sarai Siddhu. I am therefore quite prepared to admit the probability that the city of the Brahmans was surrounded by a wet ditch on which Alexander embarked to inspect the fortifications. But when Curtius adds that the three greatest rivers in India, except the Ganges, namely the Indus, the Hydaspes, and the Akesines, joined their waters to

[p.230]: form a ditch round the castle,1 I can only suppose either that the passage has been accidentally transferred from the account of some later siege of a city situated below the confluence of the Five Rivers, or that the author has mixed up into one account two and perfectly distinct statements concerning the ditches of the fort and the confluence of the rivers. Diodorus also describes the junction of the rivers, but as he makes no allusion to their waters forming a ditch about the fort, it is quite possible that this account of three rivers may be due to the inflated imagination of Curtius.

Attari is also the name of a village in district and tahsil Firozpur, Punjab.