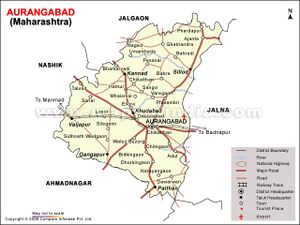 Aurangabad (औरंगाबाद) is a town and district in Maharashtra.

The world famous Ajanta Caves are located in Aurangabad district.

Note: Following content is from History And Legend In Hyderabad, pp.7-9

[p.7]:More people have heard of Ajanta and Ellora than of Aurangabad. But the story of this historic district on the Bombay border is almost as interesting as these famous masterpieces in art and architecture.

The earliest trace of human habitation in this district was discovered in the shape of a paleolithic artifact at Moongi on the left bank of the Godavari. Antiquities of the Stone Age, have been discovered at several places in the district but the regular history begins circa 300 B.C., that is, at the beginning of the early Andhra period. Since then man’s genius has continuously exerted itself in fathoming the deepest recesses of the human soul.

These sublime efforts have manifested themselves in monuments at various places, which are permeated with a spiritual glow.

The Pandavas during their exile are said to have wandered into the Aurangabad district, and also to have constructed the massive hill fortification of Deogarh (Deogiri, Devagiri).

The Surpanath hill near Kannad in the district is pointed out as having been the residence of Surpanakha whose ears and nose were cut off by Sri Lakshmana.

The expedition of Alexander made the Greeks acquainted with India and soon they also found the sea route. In those days the Dakshinapatha (Deccan) was under great vassals (Mahamandalesvaras), and hereditary land-holders (Poligars), who owed allegiance to the overlords of Tagara and Plithana (Paithan).

Ptolemy Philadelphus, king of Egypt, sent Dionysius into the southern parts of India about B.C. 268, and it was then that Tagara became known to the Greeks. It is also mentioned by Arrian that on the arrival of the Greeks in the Deccan “ Tagara was the metropolis of a large district called Ariaca, and that Tagara and Plithana were the principal marts in Dachanabades.” All kinds of merchandise from throughout the Deccan were brought to Tagara and thence conveyed on carts to Barygaza, now Broach. Ptolemy agrees with Arrian in placing Tagara and Plithana to the north of Godavari, but the

[p.8]: position of Tagara has not been quite identified, although attempts have been made to fix it near Daulatabad (Deogarh), Bhir, Junagar and Gulbarga.

Plithana is evidently Paithan, as it was about twenty days journey from, or 230 miles south of Broach; and if Ptolemy’s latitude and longitude be correct, Tagara should be 87 miles north-east of Paithan, or near Maiker in Berar.

The more general statements of Arrian and Ptolemy, however, place Tagara ten days’ Journey east of Paithan, which would bring it near Nanded on the Godavari. The remark in the Periplus that coarse dangaris, and very much fine linen, and muslins of sorts, and mallow coloured stuffs, and other merchandise were taken to Tagara from "parts along the coast," would seem to show that Tagara was also in connection with the Bay of Bengal; and it is known that even as early as the time of Sakya Muni, Kalinga on the east coast was noted for the manufacture of fine muslins.

On the silver screen of Deccan history then flashed the Greeks (Yavanas), Scythians (Sakas), and Parthians (Sahs), and the Chalukyas, Rashtrakutas, Kalachuriyas and Yadavas, till we reach 1295 A.D. when Muslims first arrived in the Deccan — Aurangabad district being almost the very first to feel their presence.

Ramadeva (Ramachandra) was the last of the independent Yadavas (1271-1310 A.D,), but his Minister, Hemadpanth, is now more well-known than the king himself.

Hemadpanth, or Hemadri, was not only the author of many books on Hindu law and other subjects, but also the originator of the Hemadpanth! style of temple architecture, as typified by numerous Hemadpanth! temples in the State today.

Alauddin Khilji was the first to invade, defeating Ramadeva in 1295 A.D. when the Yadavas became vassals of the Khiljis. Shankara, the last of his line, rebelled and was put to death in 1310.

The romance of Deval Devi and Khizr Khan, which is the subject of Ashiqa of Amir Khusro, occurred during this period and it was also during this period that Deogiri came under the sway of the Khiljis, though the fort changed hands several times till 1318 when it finally became an Imperial stronghold — Qutbuddin Mubarak Shah, Alauddin’s successor, himself entering the fort. In Nuh Sipahr, Amir Khusro relates some of the incidents of this conquest.

Aurangabad district was also the scene of the exploits of the famous slave Kafur Hazardinari, Alauddin’s favourite who rose to be the Malik Naib of the Khilji Empire and the main power behind the throne. He was murdered in Delhi only 35 days after Alauddin’s death.

The district of Aurangabad twice had the privilege of becoming the seat of a united India. The first attempt was made by Muhammad Tughlaq during the first half of the 14th century, while Aurangzeb spent his last 25 years in the Deccan with Aurangabad more or less as the headquarters of his government.

Aurangabad has been the home of Maratha saints and litterateurs, who initiated great spiritual and literary movements. Notable authors whose works to this day illuminate the pages of Indian literature are many. Among the very first was Salivahana

[p.9]: whose Kosha was a dictionary consisting 4,00,000 kathas, or Prakrit verses, in compiling which he had the assistance of no less than six authors. Among Salivahana's other works are Salivahana Saptasati, Salihotra and Gajachikitsa.

Paithan was once a seat of Sanskrit learning. Here also lived for a time the famous Maratha saint Gnaneshwar, torch-bearer of a great religious message, who attacked the snobbery of Sanskrit pundits and wrote a commentary on Srimad Bhagwad Gita, which has become a masterpiece of Marathi literature. By carrying to the common man religious literature that was until then locked up in classic Sanskrit, he created a revolution.

Another Maratha saint was Eknath. He was the first Maratha social reformer to launch an open attack on untouchability. Eknath’s grandson, Mukteshwar, was also a great Marathi poet.

In the latter days, Sri Ramdas Swami (1608-1681 A.D.) also travelled in the district. He was the spiritual guru of Shivaji, and in Saka 1571 (A.D. 1649) Shivaji Chatrapati became his disciple. During his life-time, Sri Ramdas Swami was considered an incarnation of Maruti or Hanuman. He was also a Prakrit writer and his Das Bodh, Sphut Abhang, the Samos Atmaram and Manachei Slok are well-known. Similarly, Amrit Rao (1698-1753) is noted for his katav style of writing which consists of padas of 60 syllables each. Among his well-known books are Draupadi Vastraharan, Jivadasa, Durvasa Tatra, Ramchandra Varnan, Ganapati Varnan, and a novel Druvacharita.

Among the Muslim writers were Kazi Shahabuddin Zawali, who was called “ king of sages ” by his contemporaries, Shahnawaz Khan Samsamuddaula (1669-1751), the author of Ma'athir-ul-Umara, and Gulam Ali Khan Azad (born 1704).

Aurangabad is, and has always been, famous for its attractive textiles, like Jamiwar, Mashru and Kamkhab, well-known to connoisseurs since 17th century.