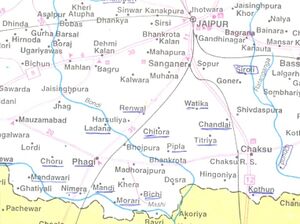 Bagru Khurd (बगरू खुर्द) is a village in Sanganer tahsil of Jaipur district in Rajasthan.

Bagru is located at a distance of 30 kms on Jaipur-Ajmer Road.

Maharaja Suraj Mal developed friendly relations with Raja Jai Singh of Jaipur, who loved him like son. Raja Jai Singh died on 21 September 1748. After Sawai Jai Singh, there was a family dispute between his two sons Ishwari Singh and Madho Singh. Suraj Mal supported claim of the elder son Ishwari Singh on the throne. Younger son Madho Singh also put forward his claim for the throne and he was supported by Maharana Udaipur Jagat Singh. A war started between two brothers at place called Jahajpur in the end of 1748, which ended up in the victory of Ishwari Singh in March 1748. [1]

After a peace of one year the Jaipur state's family dispute reached the peak. The Niwai expedition of Peshwa in May 1748 resulted into Ishwari Singh's agreeing to provide four parganas to Madho Singh. Meanwhile on receiving a message from Ishwari Singh Suraj Mal reached Jaipur with an army of 10000 and advised Ishwari Singh to ignore Peshwa's agreement. Holker then moved to attack Jaipur. Madho Singh was supported by Marathas, Rathors, Sisodia, Hada, Khichi and Panwar rulers.[2] [3]

There was a front of seven rulers against Ishwari Singh, but Jat army under the leadership of Maharaja Suraj Mal faced the supporters of Madho Singh, the combined forces of Marathas, Mughals and Rajputs in Bagru War that started on 20 August 1748. The war continued for thee days in heavy rains. Jaipur army's harawal was led by Sikar thakur Shiv Singh Shekhawat, who was killed by Gangadhar Tantya on second day. Maharaja Suraj Mal himself took the leadership of Jaipur harawal on third day. Suraj Mal fought the war with great courage and hacked himself 50 and wounded 160 enemies. He converted almost sure defeat of Ishwari Singh to a victory. [4] Thus in 1749 he established Ishwari Singh on the throne of Amber. This war enhanced the reputation of Maharaja Suraj Mal in the entire country, because he defeated Shishodias, Rathors, Chauhans and Marathas all together. [5]

Bundi court poet Shurya Mall, who was watching the above war has mentioned about the bravery of Suraj Mal in Hindi poetry as under:[6]

Translation - The Jatni did not bear the labour pain in vain, she gave birth to a brave warrior like Suraj Mal.