Note - Click → Jamalpur for details of similarly named villages at other places. 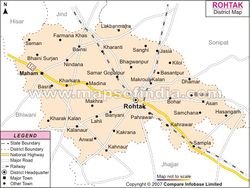 The people migrated from Badi Bahu which is 5 K.M. Away, some 150 years back (Shaaley Pana).

The ex-Prime Minister of Fiji, Mahendra Chaudhary's ancestral forefathers moved from this village to Fiji. His grandfather, Ram Nath Chaudhry, arrived in Fiji in 1902, as an indentured labourer, to work on Fiji's sugarcane plantations. On his arrival in Fiji, he disputed the agreement to work in the plantations and was employed as a store manager until he started his own business. Later, he returned to India with his wife, Jai Kali (died September 22, 1930 at age 45) whom he had met and married in Fiji, daughter, Raaj Kumari and second son, Ram Gopal. Their elder son, Krishn Gopal Chaudhry remained in Fiji. Ram Gopal Chaudhry returned to Fiji in 1934 or so. Ram Gopal had seven children (five sons and two daughters), one of them and the eldest son, Mahendra Chaudhary.

Deposed Fijian prime minister Mahendra Pal Chaudhary's emotional return to his under-developed ancestral Haryana village could turn out to be a defining movement for his warring relatives, whose ugly feud over four hectares of his property has entered village folklore.

The village, Bahu Jamalpur, which lies on the outskirts of Rohtak town, is dominated by Jats. Farming and military service are the main sources of income. [1]

Bahu Jamalpur is a typical Haryanavi hamlet boasting old world dignity and encroaching modernity. Modern tractors and cable television antennae jostle besides groups of elders taking long pulls from their ubiquitous and gurgling hookahs. Nobody appears to mind the squalor lining the narrow lanes and heaps of dung from which will be made the cakes for cooking fuel. [2]