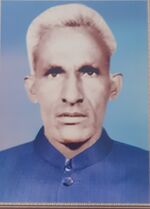 Balbir Singh Jakhar (b: 1927, d: 11 July 1976) was MLA in Rajasthan, who contested election in the year 1952. His father's name was Mohan Singh and mother's name was Chawali Devi. The name of his village is Dasa Ki Dhani in Sikar.

Balbir Singh Jakhar became a student leader in his college's student union and was elected as its president. Thereafter, he became the voice of farmers for the peasents in Shekawati region. In 1945, a Praja Mandal Yajna (meeting) held in Dasa ki Dhani which was presided by Balbir Singh Jakhar.

In year 1952, Balbir Singh contested Vidhan Sabha election on the symbol of KLP (Krishak Lok Party) from Laxmangarh constituency (now-a-days known as Laxmangarh and Fatehpur constituency) and won by a thumping margin of 17000 votes. Thus, he become the youngest MLA of Rajasthan at age of only 25 years and served the public for 5 years.