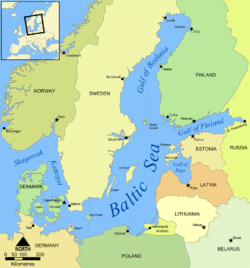 Baltic Sea is a brackish mediterranean sea located between Central and Northern Europe.

It is bounded by the Scandinavian Peninsula, the mainland of Europe, and the Danish islands.

Some Swedish historians believe the name derives from the cripple secondary god Balder of Nordic mythology. According to Ram Swarup Joon Baldeer was a Jat leader.[1]

Ram Swarup Joon writes in History of the Jats/Chapter III:

The name Scandanavia has been derived from Sikandh Nabh, Todd, while quoting Triner, writes that the Angle Saxons were Shah Nag Vanshi Jattias or Uties. After invading Scandanavia they founded Jutland. Todd writes that the greatest community of Scandanavia was Shiva Vanshi Jats. The customs of Sati and Johar were common amongst them and they had brought these with them from India. The non-Jat Population of Jut land used to call these customs barbarous.

On the death of Baldeer, a Jat leader, his elder wife Nanna was allowed the right to perform Sati but his younger wife Udan was not allowed the honour.

Quoting Herodotus Todd writes that these people 'worshipped according to Indian customs and swore on their weapons. They named their capital Asgarh. It is of interest that the ancient name of Hansi in Hissar district of Haryana was also Asgarh.

They considered the sight of certain birds as a good omen. Herodotus and Strabo agree that in about 2000 BC, the Jati community lived in Jutland. They built a temple there dedicated to their Goddess Ahilya. Her abode was in the garden and a cow drew her chariot. They also built the temple Apsala. The name of their God was Oven, which meant Budha the forefather of Chandra Vansh.

In August 2013, the geneticist Razib Khan wrote in an article for the Discover Magazine:

"Finally let's move to North India, and the zone stretching between Punjab in the Northwest and Bihar in the East. Though in much of this region Brahmins have higher "NE Euro" fractions, this relationship seems to breakdown as you go northwest. The Jatt community in particular seems to have the highest in the subcontinent. There are inchoate theories for the origins of the Jatts in Central Asia. I had dismissed them, but am thinking now they need a second look. The reasoning is simple. The Jatts of the eastern Punjab have a higher fraction of "NE Euro" than populations to their northwest (Pathans, Kalash, etc.), and Brahmin groups (e.g., Pandits) in their area who are theoretically higher in caste status. This violation of these two trends implies something not easily explained by straightforward social and geographic processes. The connection between ancestry and caste status also seems to break down somewhat in the Northwest, as there is a wide variation in ancestral components."[2]