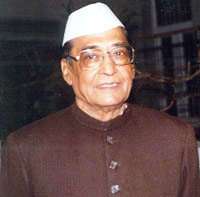 Born in Bhiwani, he studied at Pilani in Rajasthan.

He was renowned freedom Fighter and went to jail many times during the British rule. He established Parja Mandal in erstwhile Jind State in pre-independence period and launched agitation for establishment of a responsible Government in Jind State and was imprisoned several times.

He was founder of the All India Vaish Federation (Vais Maha Sammelan); Founder and Patron of the Maharaj Agrasen Medical Education & Scientific Research Society, Haryana, Trustee of Vaish Mahavidyalaya Trust. He was president of All Indian Agarwal Sammelan for over 20 years and worked hard to unite the trading community.

He was elected to the Rajya Sabha and served there from 10-4-1996 to 9-4-2002. During his tenure as Member of Parliament (Rajya Sabha) he was appreciated by parliament for best use of MPLAD (aid given through Members of Parliament for the benefit of the public).[1]