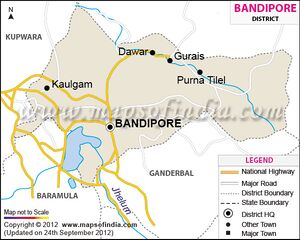 Bandipora (बांडीपूर) is town and district in the state of Jammu and Kashmir, India.

Rajatarangini[1] tells that Then the virtuous and truthful Gopalavarmma (902-904), began to reign under the direction of his mother Sugandha. Though he was yet a boy, and lived among the vile and the seduced, yet he did not contract any bad habit. His mother was now a widow, and living in luxury, asked Prabhakaradeva, a minister (treasurer), to her embrace, and bestowed on her paramour wealth, rank, and three good districts. The treasurer robbed the queen of much wealth and built a town Bhandapura at Shahirajya. The reigning Shahi disobeyed his orders to build the town, on which he changed the name of the country to Kamalaka, and gave it to Tomarana the son of Lalliya. (Book V,p.122)

It is located on the northern banks of Wular Lake - the second largest fresh water lake in Asia. Bandipora has a terraced garden similar to that of Nishat Bagh in Srinagar.

Bandipora is situated on the banks of the Wular, the largest fresh-water lake in Asia which is home to a lot of migratory birds. Inadvertent dumping of the polluted river waters and sewage affluence has led to a pandemic growth of algae in the waters of the Wular which is threatening the lake and its supporting life itself. The main source of pollution to Wullar Lake is Jhelum river. Jhelum river carries all the wastes from Srinagar city and other surrounding areas and deposits it in Wullar Lake. Despite being the richest wetland of South Asia and Largest Fresh water lake in Asia, no steps have been taken to save Wullar Lake.

Bandipora is also a stepping town to the higher reaches of Razdan, Gurez and Tragbal.

Bandipora was the connecting link between Northern India and Central Asia via the Silk Road. At Pazalpora village there was a custom and immigration department which is now a forest check post. There are strong links between skardu gurez and Bandipora.

One of the sacred places of the Hindus is Danishwar, locally also called Chota Amar Nath. It is a cave in dense forests of Erin. Pilgrims have to crawl about 60 meters to reach a cave where there are engraved features of Lord Shiva. People used to go there on the Sharvan Purnima, the date on which Amar Nath Yatra is being performed.

The important villages of Bandipora are: