For another city in Ujjain district see Badnagar. 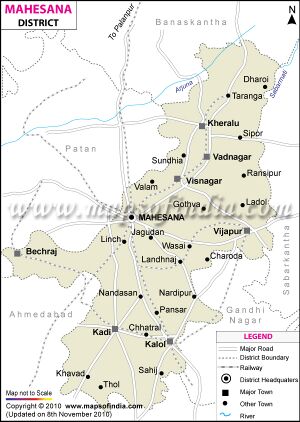 Location of Vadnagar on District Map of Mahesana

Known history of Vadnagar goes back to more than 2500 years. Vadnagar is referred to as Anartapur (आनर्तपुर) in Mahabharata. According to the great epic the Anarta warriors fought in the Mahabharata war on both the sides and the feud among them continued even after the war was over. Recent archaeological excavations have established the existence of a thriving city of religious and cultural activities at the location around the 1st century. Gujarat historians are thrilled at the discovery of a four-km long fortification south-west of Taranga Hills, comprising Jogida, Shamalia and Dhagolia, in Mehsana district. It was discovered in May 2009 and kept a closely guarded secret by the state archaeology department. They have all the reasons to believe that this could be the city of Anarthpura, the fabled land of warriors and the possible origin of Gujarat. [2]

The Junagarh rock inscription of the Saka ruler Rudradaman I (130-160 CE) mentions Anarta as a part of his kingdom. He placed Anarta under his Pahlava (Parthian) Amatya (minister) Suvishakha, who re-built a dam on the Sudarshana Lake there.[3]

Vadnagar has also yielded an image of Bodhisattva dated back to the 3rd or 4th century AD. This image seems to be brought from Mathura to install in one of the Buddhist monasteries of the town. Chinese traveller Xuanzang visited Vadnagar in the 641 A.D. and recorded the presence of Buddhist establishments.[4]

It is also said that Vadnagar was the earliest capital of Gujarat. Vadnagar's main is located inside the walls of a fort which has 6 huge gates namely Arjun Bari, Nadiol, Amarthol, Ghaskol, Pithori and Amarthol in which Amarthol gate area is the oldest existing part of the town.

The river Kapila used to flow through the town of Vadnagar.

Vadnagar was one of the Towns and Villages of Chauhan Dominions (s.N.223.) as per Early Chauhān dynasties: a study of Chauhān political history, Chauhān political institutions, and life in the Chauhān dominions from C. 800 to 1316 A.D., by Dasharatha Sharma, Books treasure, Jodhpur. ISBN 0-8426-0618-1.

Alexander Cunningham[5] writes that Hwen Thsang places O.nan.to.pulo, or Anandapura, at 700 li, or 117 miles, to the north-west of Vallabhi[6] This town has been identified by M. Viven de Saint- Martin with Barnagar, on the authority of the Kalpa

[p.494]: Sutra of the Jains ; but tile bearing is to the east of north, and the distance is 150 miles, or 900 li. Barnagar has already been mentioned as the Sanskrit Vadapura, or Barpur. The district was 2000 li, or 333 miles, in extent, and was a dependency of Malwa. This estimate of its size will be fully met by limiting its territory to the triangular tract lying between the mouth of the Banas river on the west, and the Sabarmati river on the east.

There are scores of temples dedicated to almost every God: Shiva, Chhabila, Hanuman, Ashapuri Mata, Ambaji Mata, Vishnupuri, Gaurikund etc. Of the numerous Shiva shrines, the 15th-century "Hatkeshver Mahadev" is the most important. He is the family deity of the Nagar Brahmins. The premises also house an older Swaminarayan Temples (one for male and one for females), two Jain derasars, a goddess Ashapuri temple (Shaktipith), goddess Bhuvaneshpuri Temple, Somnath Mahadev Temple, Daaneshwar Mahadev Temple and Vishnupuri Temple (it is said that God Vishnu himself had stepped here). There is the "Sitla Mata" Temple ornately carved with figures of celestial beings.

Kirtistambhas: The most striking pieces of architecture in Vadnagar, however, are the two magnificent Kirtistambhas or triumphal arches. Built of red sandstone they are both identical in size and style. Only, one lies in pieces on the ground (now re-erected) and the other stand erect. Its pillars and arches are decorated with lozenges at the base and geometric and floral designs-leaves, creepers, lotus, animal motifs, human figures engaged in various activities and divine figures in different poses. The top bears an image of a seated god Kartikeya flanked by Ganesh and Makara (griffin) from which spring arches.

The town is also blessed with a magnificent lake named as "Sharmistha Lake" which has a small island like place amidst it.

Vadnagar is also known as Skandhpur after Kartikeya, who is identified with Murugan.

Arnoraja attacked Kumarapala Chalukya but got defeated. This defeat of Arnorja and Ballala, his the Malwa ally, is mentioned in the Vadnagar prashasti, dated Thursday, the 5th of bright half of ashvina, V. 1208 and that of Arnoraja alone is in Chittor Inscription of V. 1207 which states that after having defeated the ruler of Shakambhari, Kumarapala reached Shalipura (modern Shalera) and fixing his camp there went to have the glorious view of the Mount Chitrakuta. (Lines: 10-13, EI,II,p.421ff) Thence he proceeded to Palari where, according to Tod he placed an inscription in the month of Pausha, V. 1207. [7]

The Prasasti of 1151 A.D. of Chalukyas of Vadnagar says, "at the request of the gods, to protect them from the Danavas, Brahma, when performing the Sandhya ceremony produced the hero Chulukya from the Ganges water in his hollowed palm" ( EI., Vol. I, p. 301.) [8]

James Tod[9] writes that The actual conqueror of Chitor, Bapa or Bappa, is said in inscriptions to have belonged to the branch known as Nagar, or ' City ' Brahmans which has its present headquarters at the town of Vadnagar in the Baroda State.

1. Left side of the Arjunbari gate, dated S.1689, chaitra sudi 15, A.H.1042, Ramadan, 15 March 1633 AD. States that Arjunbari gate was rebuilt by Lutfu'llah Baig to ensure the protection of the general public, when Islam Khan was the Kaji of the Suba. Composed by Jagjiwan Das with the hope to be favoured with the darshan of shri Siddh Nath.

2. Above the side mihrab of Jami Mosque in Kasba Mohalla, dated A.H. 1095= 1683-84 AD,Records the construction of mosque by Sayyad Muhammad son of Sayyad Ni'matu'llah. Text inscribed by Kamal Muhammad (son of) Sharif Muhammad .

There is another Vadnagar in Junagarh tahsil and district in Saurastra, Gujarat.