H.A. Rose[1] writes about : Bauria, Bawaria (बावरिया). The following is Sir Denzil Ibbetson's account of the Bauria groups : — " They are said to be divided into three sections : the Bidawati of Bikaner who trace their origin to Bidawat in Jaipur, do not eat carrion, disdain petty theft but delight in crimes of violence, will not steal cows or oxen, and affect a superiority over the rest; the Jangali or Kalkamlia, also called Kāldhaballia — fr. dhabla, a skirt, the blanket, kamal, forming a petticoat, — generally found in the Jangaldesh of the Sikh States, Ferozepore, and Sirsa, and whose women wear black blankets ; and the Kāparia who are most numeroua in the neighbourhood of Dehli, and are notoriously a criminal tribe. The three sections neither eat together nor intermariy. The Kālkamlia is the only section which are still hunters by profession, the other sections looking down upon that calling. The Kāparia are for the most part vagrant ; while the Bidawati live generally in fixed abodes."

This account is amplified in an interesting account of the tribe by Mr. H. L. Williams of the Punjab Police. He gives the following table of their tribal system which is clearly based on the usual principle of territorial and other groups which cross-divide the natural sections* : —

* As regards the Baurias in Lyallpur Mr. J. M. Dunnett writes : — " There is a further and occupational division among tho Baurias, Non-cultivators are Kapria, Gumria, and Gadera, while Kaldhablia, Deswalia, Dewawate and Labana are cultivators. The division, I think, really means that some live by hunting pure and simple, the others combining agriculture with it. At any rate the difference in izzat is so great that intermarriage between two divisions is unknown. Why Gadera, which must mean a shepherd, is classed as non-agriculturist, while Labanas, who hunt pigs are classed as cultivators I do not know." 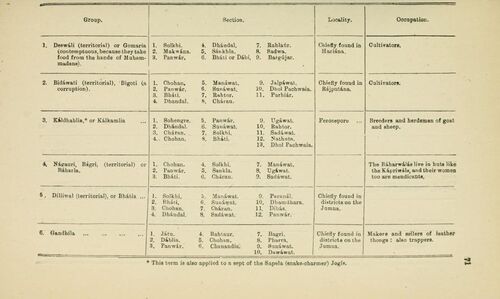 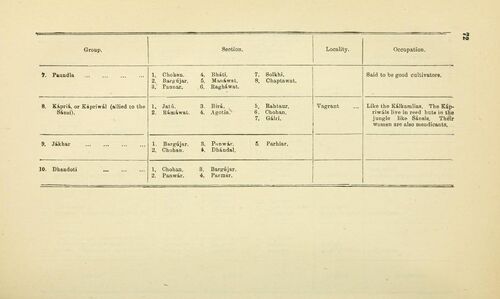 Besides the derivation from bāwar, a snarc, which is the one usually given, Mr. Williams records other traditions as to the origin of the name 'Bauria'. According to one the emperor Akbar demanded a dola from Sandal, Raja of Chitor, and on the latter's refusing, a battle was fought, in which some of the warriors were engaged near a baoli or well. Those on the Rajput side were called Baolias or Bawalias. A third explanation is that, after the capture of Chitor, a young man of one of the tribes which had taken to the jungles saw and loved a Rajput maid of good lineage. They were married, but the young man returned to jungle life and was called Baola (imbecile) by tho bride'a relations for doing so, or on account of his uncouth manner. Mr. Williams' account continues : —

"Tradition says that the Bawarias are descendants of Chanda and Jora, and when Fatta and Jaimal, Rajputs of the Surajbans or Solar race, were joint Rajas of Chitor, Shahab-ud-din of Ghor assailed the fortress. It was defended by the Rajputs and their feudal military classes, of whom the Bhils were the professional bowmen ; the Aheris, the skilled swordsmen ; and the Bawarias, the bandukchis* or musketeers. In this connection the Bawarias, although claiming Rajput origin, do not profess to have been the equals of the Rajput ruling class, but rather their vassals or feudatories. Some few Bawarias still wear the Rajput badge of metal kara, or ring, on the right ankle.

"Of the now out-caste tribes, whom the Bawarias recognize as having shared with them the defence of Chitor, the Gadi Lohars, or wandering cutlers, are not only distinguished by the Rajput clan designations and silver and metal karas, but openly proclaim that they are doomed to a wandering existence till the Rajput power is again established in Chitor.

"Religion. — The religion of the Bawarias is ancestor worship combined with allegiance to certain deities who are common to them and other out-caste or foul-feeding tribes." Mr. Williams then remarks that several Bawaria clans affect Guga, many of their members wearing silver amulets with his image in relief. It would appear that the cult of Guga is specially affected by the clans of Chauhan descent, as Guga was a Rajput of that tribe and is peculiarly the patron of all clans which claim Chauhan origin. The Bhatis and other groups also affect Guga, and such groups as worship him do not affect Devi.