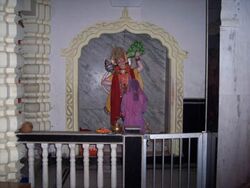 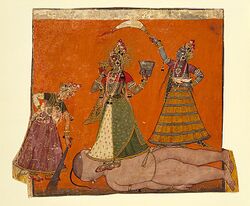 Bhadrakali (IAST: Bhadrakālī, Devanagari: भद्रकाली) , also known as the gentle Kali, is generally an auspicious form of the goddess Kali, and the legend states that she came into being by Devi’s wrath, when Daksha insulted Shiva. It is believed that Bhadrakāli was a local deity, which was assimilated into the mainstream Hinduism, particularly into Shaiva mythology. Sometimes, she assumes terrible aspect, and is represented with three eyes, and four, twelve or eighteen hands. She carries a number of weapons, with flames flowing from her head, and a small tusk protruding from her mouth. She is the consort of Virabhadra. [1] This way she is ancestor of many Jat clans.

The historian Ram Swarup Joon has given the chronology of Virabhadra, obtained from the records of the Bards of Dholpur, in his book ‘History of the Jats’ (1938, 1967) as under: [2]

In the branch of Puru there was ‘Sanyati’ whose son was Virabhadra. Virabhadra had four sons 1. Pon Bhadra 2. Kalhan Bhadra 3. Atisur Bhadra and 4. Jakh Bhadra.

According to Ram Swarup Joon, the descendants of above spread as under:

(a) Pon Bhadra’s descendants Punias to Haryana, Brij, and Gwalior 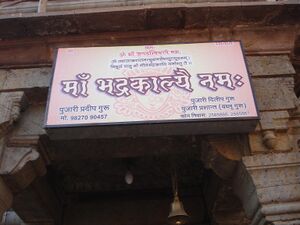 It is clear from the above chronology that some descendants of Virabhadra have moved to Malwa and Gujarat. There must be some traces left in these areas.