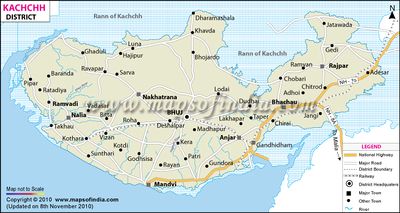 Bhadresar or Bhadreshwar is a village in Kachchh district in Gujarat.

There are a number of temples built by Jain followers in Kutch. The Bhadreshwar temple, one of the most ancient temples situated in Bhadrawati, considered a very holy place is one such. Bhadrawati was ruled by King Sidhsen in 449 B.C (according to the Hindu calendar) who renovated the place. Later it was ruled by The Solankis who were Jains, and they changed the name to Bhadreshwar. Then in 1315, a great famine struck Kutch, after which the place was renovated by Jagadusha.[1]

Near the village of Jalvana, at Koday Bohter Jinalaya is Jain pilgrim's holy place. There are 72 statues of Jain Gods. The main God here is Prabhu Aadeswarji. The divine statue is 73 inches tall. Not only Jains but also people of all religions from all over India and abroad come and visit this temple.[2]