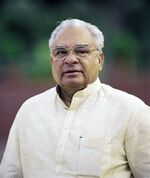 Bhajan Lal Manjhu (6 October 1930 – 3 June 2011) was a politician and three-time chief minister from Haryana. He first became the Chief Minister in 1979, again in 1982 and once again in 1991. He also served as Union Agricultural Minister.

Bhajan Lal was born on 6 October 1930 in Koranwali village in Bahawalpur princely state, which now lies in Pakistan. He married to Jasma Devi, by whom he had two sons - Chander Mohan and Kuldip Bishnoi - and a daughter, Roshni. He started his career as a trader in Adampur town of Hisar district and later entered into politics from the Adampur Vidhan Sabha constituency.

Bhajan Lal was the chief minister of the Haryana state twice, his first term from 28 June 1979 to 5 July 1985, and his second term from 23 July 1991 to 11 May 1996. He had also served as a union cabinet minister at the Centre, holding the Agriculture and Environments & Forest portfolios during Rajiv Gandhi's administration. After Mrs. Indira Gandhi came to power in January 1980, Bhajan Lal was Janata Party's CM in Haryana; he immediately defected with a huge chunk of Janata Party's MLAs to Congress and continued as CM. This brazen act made him notorious as an exemplar of 'आया राम गया राम' culture in which opportunist politicians show no loyalty. He consolidated non-Jat vote in his Jat-dominated state, and was the last non-Jat CM of the 20th century. Full 18 years were to pass before BJP's Manohar Lal Khattar became Haryana's first non-Jat CM of 21st century in 2014.

The victory of the Indian National Congress in Haryana's 2005 elections caused a major rift in its state unit, as it opted to make Bhupinder Hooda, a Jat, the Chief Minister instead of Bhajan Lal. In 2007, Bhajan Lal officially announced he would form a new party, called the Haryana Janhit Congress. The key event that brought this about was the suspension of his son Kuldeep Bishnoi from the Indian National Congress, for criticizing the party's central leaders.

This bio data has been copied from the website of Rajya Sabha - http://rajyasabha.nic.in/rsnew/pre_member/1952_2003/b.pdf