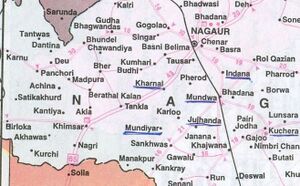 Location of villages around Kheenvsar, Nagaur

PIN Code of the village is: 341025. It is situated 13km away from Kheenvsar town and 55km away from Nagaur city. Being a large village, Bhawanda village has its own gram panchayat. Charda, Tadawas and Dharnawas are some of the neighbouring villages.