This gotra is said to be started from their ancestral Nagavanshi King named Bhairava/Bhairav (भैरव). [8]

Bhairogarh near Ujjain is main site of ancient Ujjain, containing the remains of structures which are dated to 3rd -2nd Century B.C.[9]

Dr Naval Viyogi [10] writes that ....Maharashtra is one of the well known centres of Naga-worship Matangi, Renuka, Santeri, Marugan, Subrahmani, Khandowa, Jyotiva, Khalnath and Bheron are deities related to Naga-worship. Similarly images of serpent or Nagas like Kartikeya, Basuki, Skand Nag, Murugan, Subrahmanya, are also worshipped in every corner of Maharahtra. [11]

The Khokhars of Nadhagarh and Bhairon were an influencial clan in the early days of Jhang history. [12]

The Bharwanas trace their descent to Bhairo, sixth in desent from Mahni. [13] 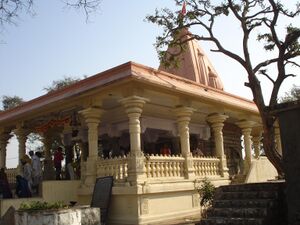 The worship of the eight Bhairavas is a part of Saivite tradition, and the chief among them is Kala Bhairava. The Kal Bhairava temple is believed to have been built by King Bhadrasen, on the banks of the Shipra. Mentioned in the Avanti Khanda of the Skanda Purana. Important for the Tantric Kapalika and Aghora sects, of which Ujjain was a prominent centre. Beautiful paintings in the Malwa style once decorated the temple walls, only traces of which are visible. The village of Bhairogarh, famous for its printing, takes its name from the temple, and is located very near.

H.A. Rose[16] writes that Sipra, subdivision of Gill tribe, only give daughters to the Bharwan clan of the latter tribe or within their own circle.

Adi Parva, Mahabharata/Mahabharata Book I Chapter 52 gives the names of all those Nagas that fell into the fire of this snake-sacrifice. Bhairava was one of them and is mentioned in verse (I.52.15). Bhairava was born in the race of Dhritarashtra naga.[17]

The Bharwanas are a sub-caste of Sial (tribe) of Jats who came to this part of the subcontinent (Pakistan) in the 14th century from Rajasthan, India. They embraced Islam at the hands of Sufi poet Baba Farid Ganj Shakar. Bharwanas are settled along river Chenab in villages like Satiana, Mukhiana, Khewa, Sultanpur, Chund Bharwana, Qaim Bharwana, Kot Mirza and Chianwala in the Jhang and Chiniot tehsils. They have been a political force in the district for a long time. One of their elders, Mehr Zafarullah( Nasir Abad ) became chairman of Jhang District Council in 1987 and 1991. He also became MPA for three times and he also was the Advisor to Chief Minister.Mehr Ghulam Haider returned as MNA on several occasions. Mehr Akhtar Abbas became chairman of Jhang District Council in 1991.

Bharwanas were traditionally very strict about their women. But now literacy rate among Bharwana women is improving day by day. that some women are playing important role in the politics of Pakistan nowadays, these renowned personalities are, Ghulam Bibi and Saima Akhtar.

Ghulam Bibi belongs to Satiana village, situated in the heart of the constituency, and is a granddaughter of former MNA the late Ghulam Haider Bharwana.

Saima Akhtar belongs to Kot Mirza, Jhang.She is facing a very strong candidate in Sahibzada Nazir Sultan of the Millat party. Saima came into politics when her father Akhtar Bharwana.

The Bharwana clan are a landlord, horse loving, pet loving, breaucratic & political clan in Pakistan and even now in all over the world, popular because the men from Bharwana Family are brave, fighter and respective and women too.