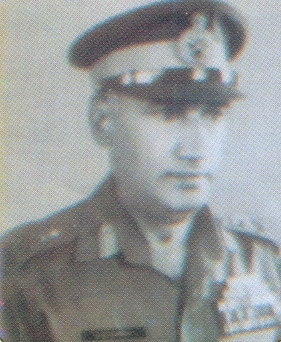 Lieutenant General Khem Karan Singh (Doderiyan) (born: 5.3.1919- death:26.7.2016) was the greatest commanders and a highly decorated officer of Indian Army. He displayed outstanding skill, high tactical ability and great devotion to duty for which he was awarded the Maha Vir Chakra on 6 September 1965.[1] He was awarded the Padma Bhushan in 1972 for his meritorious service in Indo-Pak War.

He was born on 5th March, 1919 in village Badani, Rohtak district, Haryana. His father's name was Captain Bharat Singh.

During the 1962 Indo-China War, he was Commander posted at Tezpur Headquarters. When the Deputy Commissioner of Tezpur fled away, Lt Gen Singh asked the SDM to perform the duty, and helped maintain the morale of the civilians. In the 1965 Indo-Pak War he was a Brigadier commanding an Armoured Brigade in the Sialkot Sector and was awarded the MVC for his gallantry. He was promoted to the rank of Lt General during the 1971 Indo-Pak War and appointed General Officer Commanding I Corps.

He was the only D.G.M.O. in world whose plan for war was accepted in toto by head of state[p. m.] and war was won.

Brigadier K K Singh, commanded his Armoured Brigade in action in the Sialkot Sector from 6th September to 22nd September, 1965. In addition to his own Brigade, Brigadier Singh was given command of additional tank units in order to cope with the enemy tanks which were superior both in numbers and quality. The force under Brigadier Singh destroyed over 75 enemy tanks. This was possible due to his able leadership and by his being in the thick of the battle in his own tank. Brigadier K K Singh fought the battle of Phillora for three days and nights. Finally because of his superior leadership, better tactical and technical performance, the enemy forces were defeated and thrown out of this important communication centre. He was given the task of destroying as much enemy tanks and equipment as possible. Just a few days before ceasefire the enemy commanders were so demoralized that they avoided combat. Brigadier Khem Karan Singh displayed outstanding skill, high tactical ability and great devotion to duty for which he was awarded the Maha Vir Chakra on 6 September, 1965.

In this war, the newly promoted Lt Gen K K Singh was the GOC of I Corps. He was given the job of removing the threat to Punjab and our vital communication lines to Jammu & Kashmir. The enemy in that sector had well developed fully prepared system of defenses protected by extensive minefields in depth. Lt Gen Singh showing great professional ability and planning, pressed on with his offensive in the Shakargarh Sector inflicting great losses to the enemy. He forced the enemy to commit its Armor to battle and caused heavy attrition to the enemy. He showed devotion to duty and leadership of exceptionally high order for which he was awarded the 'Padma Bhushan'.

After 32 years of meritorious service he retired from the Indian Army to his farm in village Amarpur, Tehsil Palwal, Faridabad. After retirement he took great interest in agriculture.

Brigadier Khem Karan Singh fought the battle of Phillora for three days and nights. Finally, because of his superior leadership, better tactical and technical performance and the firm determination of our troops, the enemy force was defeated and was thrown out of this important communication centre.

The task assigned to his formation in the initial stages was to destroy as much enemy equipment as possible;it was performed so well that the enemy had to move up all reserves in order to hold the line. A few days before the cease fire the enemy tanks commanders were so demoralised that they avoided close combat and engaged our forces only at extreme range. 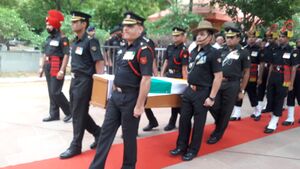 Lt Gen khem Karan Singh, MVC, Padma Bhushan left for heavenly abode on 26 Jul 2016. Cremation was at Brar Square, Delhi Cantt on 27 Jul at 10.00 hrs. Wreaths were laid on behalf of the Chief of Army Staff, Western & Central Army Commanders. Admiral Sunil Lanba, Chief of Naval Staff attended the cremation, Army was represented by his old regiment 16 Cav, with one Col, 3JCOs and many OR, besides others who had served with him. His village and area people came by bus load and attended the ceremony.

Back to The Brave People/ Military Services