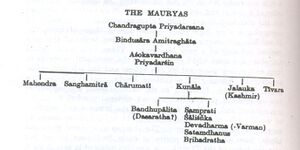 Brihadratha Maurya was the last ruler of the Maurya Empire. He ruled from c. 187 – c. 180 BCE. He was killed by his general, Pushyamitra Shunga, who went on to establish the Shunga Empire. Mauryan territories, centred on the capital of Pataliputra, had shrunk considerably from the time of Ashoka when Brihadratha came to the throne.

According to the Puranas, Brihadratha succeeded Satadhanvan Maurya and ruled for seven years.[1]

Brihadratha Maurya was killed in 180 BCE and power usurped by his general, Pushyamitra Shunga who then took over the throne and established the Shunga Empire.[2] Bāṇabhaṭṭa's Harshacharita says that Pushyamitra, while parading the entire Mauryan army before Brihadratha on the pretext of showing him the strength of the army, crushed his master.[3] Pushyamitra killed the former emperor in front of his military and established himself as the new ruler.