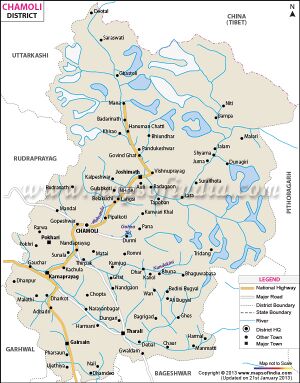 Chamoli (चमोली) is a district in Uttarakhand state of India. The administrative headquarters of the district is Gopeshwar.

It is bounded by the Tibet region to the north, and by the Uttarakhand districts of Pithoragarh and Bageshwar to the east, Almora to the south, Garhwal to the southwest, Rudraprayag to the west, and Uttarkashi to the northwest.

The region covered by the district of Chamoli forms part of the Pauri Garhwal district of the Kumaon till 1960. It occupies the northeastern corner of the Garhwal tract and lies in the central or mid-Himalayas in the very heart of the snowy range described in ancient books as Bahirgiri, one of the three divisions of the Himalayan mountains.

Chamoli is the land of forts. Today’s Garhwal was known as kedar-khand in the past. It is believed that God Ganesha first script of vedas in Vayas gufa situated in the last village Mana only four km. from Badrinath.

According to Rigveda (1017–19) after Inundation (Jalprlya) Sapt-Rishis saved their lives in the same village Mana. Besides there the roots of vedic literature seems to be originated from Garhwal because the Garhwali language has a lot of words common with Sanskrit. The work place of vedic Rishis are the prominent pilgrim places in Garhwal specially in chamoli like Atrimuni Ashram in Anusuya about 25 km from chamoli town and work place of Kashyap Rishi at Gandhmadan parwat near Badrinath. According to Aadi-Puran, vedvyasa scripted the story of Mahabhrat in Vyas Gufa near Badrinath. Pandukeshwar, a small village situated on the Rishikesh- Badrinath high-way from where Badrinath is just 25 km away is regarded as Tapsthali of king Pandu. In Kedar-khand Puran this land is regarded the land of lord Shiva.

The authentic script about the history of Garhwal is found only 6th AD onward. Some of the oldest examples of these are the trishul in Gopeshwar, lalitsur in Pandukeshwar. The Narvaman rock script in Siroli the Chandpur Gari rock script by king Kankpal authenticates the history and culture of Garhwal.

Some historians believe that this land is origin of Arya race. It is believed that about 300 BC, Khasa invaded Garhwal through Kashmir Nepal and Kuman. A conflict grew due to this invasion a conflict took place between these outsiders and natives. The natives for their protection built small forts called Garhi. Later on, Khasa defeated the native totally and captured the forts.

After Khasa, Kshatiya invaded this land and defeated Khasa accomplished their regime. They confined Garhwal of hundreds of Garhi in to fifty-two Garhi only. One kantura vashudev general of kshatriya established his regime on the northern border of garhwal and founded his capital in Joshimath then Kartikeypur vashudev katyuri was the founder of katyura dynasty in Garhwal and they reign Garhwal over hundreds of years in this period of katyuri regime Aadi Sankaracharya visited garhwal and established Jyotrimath which is one of the four famous Peeths established by Adi Sankaracharya. In Bharat varsh other these are Dwarika, Puri and Sringeri. He also reinstated idol of lord Badrinath in Badrinath, before this the idol of Badrinath was hidden in Narad-Kund by the fear of Budhas. After this ethicist of vaidic cult started to pilgrim Badrinath.

According to Pt. Harikrishna Raturi, king Bhanu pratap was the first ruler of Panwar dynasty in garhwal who founded chanpur-Garhi as his capital. This was is strongest Garh for the fifty-two garhs of garhwal.

The devastating earthquake of 8 September 1803 weakened the economic and administrative set-up of Garhwal state. Taking advantage of the situation, Gorkhas attacked Garhwal under the command of Amar Singh Thapa and Hastidal Chanturia. They established there reign over half of the Garhwal in 1804 up to 1815 this region remain under Gorkha rule.

Meanwhile, the king of Panwar dynasty Raja Sudarshan Shah contacted east India Company and sought help. With the help of British he defected Gorkas and merged the eastern part of Alaknanda and Mandakini along with the capital Srinagar in British Garhwal from that time this region was known as British Garhwal and the capital of Garhwal was set up at Tehri instead of Srinagar. In the beginning British ruler kept this area under Dehradun and Saharanpur. But later on the British established a new district in this area and named it Pauri. Today’s chamoli was a tehsil of the same. On 24 February 1960, tehsil Chamoli was upgraded to a new district. In October 1997 two complete tehsil and two other blocks (partially) of district Chamoli were merged into a new formed district Rudraprayag.

Chamoli hosts a variety of destinations of pilgrim and tourists' interest. Badrinath, Hemkund Sahib, Valley of Flowers and Auli. Chamoli also happened to be a birthplace of "Chipko movement". Chamoli proved itself "the most spectacular in its natural assets; be it scenery, valley aspects, water-edges, floristic varieties, dramatic landform or the climatic cardinalities". The district is also inhabited by Bhotiya ethnic group who adhere to Hinduism.