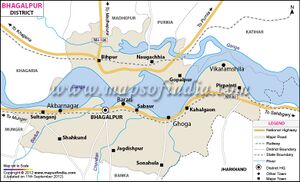 The city is situated 220 km east of Patna and 60 km east of Munger. The river Ganges flows through the district.

The name Bhagalpur is etymologically derived from Bhagdatpuram (meaning city of Good Luck), as it was called during the flourishing period of the Anga Kingdom. Bhagdatpuram, as per Hindu mythological texts, was the place where the gods (devtas) and demons (asuras) churned the ocean to procure elixir (amrit).

The Bhagalpur city had a big harbour on the River Ganges at a place called Champanagar, now called Champanala, which flows on the western boundary of the present city near Nathnagar. Many boats and coins of the Middle and Far East were found during an archaeological excavation carried out in the 1970s.

In the process of Churning of ocean it is believed that the serpent, Vasuki, offered to serve as the rope for the churning. An impression of the coil is faintly visible on Mount Mandara, a granite hill situated along the national highway between Bhagalpur and Dumka. It is believed that Panchjanya, the conch shell used in the Mahabharata was discovered here in the "Shankh Kund". The Puranas also refer to this hill. It is said that Vishnu covered the demon Madhu under the hill after defeating him to death. Kalidasa's Kumarasambhava refers to foot marks of Vishnu on the slopes of Mount Mandara. The hill is replete with relics of bygone ages. Apart from inscriptions and statues, there are numerous rock cut sculptures depicting various images of Hindu Gods.

It is stated in the Vayu Purana and Brahmanda Purana that rule of Bharsivas was not only confined to SamayuktaPrant alone but also to the east and the western Bihar also because their capital was in Mathura as well as in Champavati-Bhagalpur.[2][3]

The hill is equally revered by the Jains who believe that their 12th Tirthankara attained nirvana at the summit. The area around Mandara Hill is laced with a landscape of extraordinary splendour. The 800 feet high granite hill is a sight to see during daylight. It is a popular picnic spot for people living in the area. The religious festival of "Vish-hari Puja" or "the worship of the Snake Queen" or "Manasa Devi, said to be a daughter of lord Shiva and Queen of Snakes" traces its roots back hundreds of years and is still celebrated every year with thousands of believers and snake charmers offering milk to the Nag (the Snake King) and Nageen (The Snake Queen).

References to Bhagalpur can be found in Indian epics like the Ramayana and the Mahabharata where Bhagalpur has been described as the kingdom of Anga.

The tomb of Suja, brother of Moghul emperor Aurangzeb, in the heart of the town is reminiscent of the city's association with the Mughal period.

Bhagalpur formed a part of the ancient Sanskrit kingdom of Anga, said to be ruled by king Karna of Mahabharata who was well known for his charity. In later times it was included in the powerful Hindu kingdom of Magadha, or Behar, and in the 7th century it was an independent state, with the city of Champa as its capital.

Afterwards it formed a part of the Mohammedan Kingdom of Gaur, West Bengal, and was subsequently subjugated by Akbar, who declared it to be a part of the Delhi empire. Bhagalpur passed to the East India Company by the grant of the emperor Shah Alam II in 1765. Bhagalpur was one of the most important trade centers in Bengal Presidency during the British rule in India.

James Legge[6] writes that Following the course of the Ganges, and descending eastwards for eighteen yojanas, he found on the southern bank the great kingdom of Champa,1 with topes reared at the places where Buddha walked in meditation by his vihara, and where he and the three Buddhas, his predecessors, sat. There were monks residing at them all. Continuing his journey east for nearly fifty yojanas, he came to the country of Tamalipti,2 (the capital of which is) a seaport. In the country there are twenty-two monasteries, at all of which there are monks residing. The Law of Buddha is also flourishing in it. Here Fa-hien stayed two years, writing out his Sutras,3 and drawing pictures of images.

After this he embarked in a large merchant-vessel, and went floating over the sea to the south-west. It was the beginning of winter, and the wind was favourable; and, after fourteen days, sailing day and night, they came to the country of Singhala.4 The people said that it was distant (from Tamalipti) about 700 yojanas.

The kingdom is on a large island, extending from east to west fifty yojanas, and from north to south thirty. Left and right from it there are as many as 100 small islands, distant from one another ten, twenty, or even 200 le; but all subject to the large island. Most of them produce pearls and precious stones of various kinds; there is one which produces the pure and brilliant pearl,5 — an island which would form a square of about ten le. The king employs men to watch and protect it, and requires three out of every ten such pearls, which the collectors find.

3 Perhaps Ching {.} is used here for any portions of the Tripitaka which he had obtained.

4 “The Kingdom of the Lion,” Ceylon. Singhala was the name of a merchant adventurer from India, to whom the founding of the kingdom was ascribed. His father was named Singha, “the Lion,” which became the name of the country; — Singhala, or Singha-Kingdom, “the Country of the Lion.”

5 Called the mani pearl or bead. Mani is explained as meaning “free from stain,” “bright and growing purer.” It is a symbol of Buddha and of his Law. The most valuable rosaries are made of manis.

Alexander Cunningham[7] writes that From Mongir, Hwen Thsang travelled eastward for 300 li, or 60 miles, to Chen-po, or Champa, which is an old name of the district of Bhagalpur. The capital was situated on the Ganges, at from 140 to 150 li, or 23 to 25 miles, to the west of a rocky hill that was completely surrounded by the river. On its summit there was a Brahmanical temple. From this description it is easy to recognize the picturesque rocky- island opposite Patharghata with its temple-crowned summit. As Patharghata is exactly 24 miles to the east of Bhagalpur, I conclude that the capital of Champa must have stood either on the same site, or in its immediate vicinity. Close by, on the west side, there still exists a large village named Champanagar, and a smaller one named Champapur, which most probably represent the actual site of the ancient capital of Champa.

The pilgrim estimates the circuit of Champa at 4000 li, or 667 miles ; and as it was bounded by the Granges on the north, and by Hiranya-Parvata, or Mongir, on the west, it must have extended to the Bhagirathi branch of the Ganges on the east and to the Daumda river on the south. Taking the two northern points at Jangira and Teliagali on the

[p.478]: Ganges, and the two southern points at Pachitt on the Damuda and Kalna on the Bhagirathi, the length of the boundary line will be 420 miles measured direct, or about 500 miles by road distance. This is so much less than the size estimated by Hwen Thsang that I think there must either be some mistake in the text or some confusion between the geographical limits of the original district of Champa, and its actual political boundary at the time of the pilgrim's visit. We know from his journal that the king of Mongir, on the west of Champa, had been dethroned by a neighbouring raja, and that the district of Kankjol on the east of Champa was then a dependency of the neighbouring kingdom. As Champa lies between these two districts, I infer that the raja of Champa was most probably the king who conquered them, and therefore that the large estimates of Hwen Thsang must include these two states to the east and west of the original Champa. Under this view, the political boundaries may be stated as extending from Lakhiterai to Raj-mahal on the Ganges, and from the Parasnath Hill along the Daumda river to Kalna on the Bhagirathi. With these boundaries the circuit of Champa will be about 550 miles measured direct, or 650 miles by road distance.