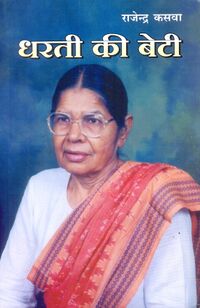 Chandrawati was born in the family of Hawaldar Hajari Ram Sheoran son of Mohar Singh. Her mother was Dhaula Bai from village Ghardana Kalan in Jhunjhunu district of Rajasthan. Her mother Dhaula Bai died in 1932 when Chandrawati was at the age of four years.[1] Her father hawaldar Hazari Ram died in 1944 at the age of 57 when she was getting education at Pilani. It is interesting to note that she was married as per traditions in early childhood along with her elder sister but she was not sent to her in-laws due to her tender age. After few years her spouse died but Chandrawati was unaware of these facts at that time. [2]

She got higher education at Birla Balika Vidyapeeth, Pilani and completed Metric in 1948. After completing Metric Ghanshyam Das Birla advised her to get free education at Pilani with the condition that she will latter have to teach for three years in Birla Institutes Pilani. But she wanted to become a Doctor rather than a teacher so took admission in Maharaja College, Jaipur in Science faculty and completed Intermediate. She latter changed to Arts faculty and did graduation from Sangrur (Punjab) in 1953. [4]

She did Law (L.L.B.) from Delhi University and become the first woman Law Graduate in the region.As a student, she participated in the freedom movement.

Chandrawati got elected as MP (Lok Sabha) in 1977 from Bhiwani Constituency. Her bio data is available at Lok Sabha website -

Social activities: Propagation of education in rural areas, especially amongst the girls. 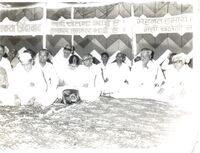 She was the founder member of almost all the Women Organisations of the Party and the Government at the National and State level. She was a founder member of the Kisan Trust and was leading light in organising the Kisan Sammelen, the biggest ever farmers' gathering organised in Delhi during 1977. In appreciation of her clean and honest image, all the financial matters of the organisation were assigned to Smt. Chandrawati.

Public interest has been of prime concern throughout her life. She is deeply interested in rural economy, preservation of its wealth and wild life. Reading Hindi and English Literature are her other interests; promoting education of students, specially the women folk has been a matter of great interest to her. All through, Smt. Chandrawati stood for the justice for the masses; and for this cause fought against the highest and mightiest regardles's of party affiliations or any other consideration. Having had a long tenure in politics, she have been more as a social worker and a statesman than a politician.

Former Lieutenant Governor of Puducherry Chandrawati, who stormed the Haryana’s political scene when she defeated then Defence Minister Bansi Lal on his home turf Bhiwani in the 1977 General Election in the shadow of the Emergency, passed away at the Rohtak’s PGIMS in on Sunday (15 November 2020) morning.

Chandrawati, a native of Bhiwani’s Dalawas village, has a number of firsts to her credit. She was the state’s first woman to become a Member of Parliament (1977), the first woman minister in Haryana (1964-66) and the first woman Leader of Opposition (1982-85). She was also the first enrolled advocate from the state.

Later, Chandrawati joined politics. She became an MLA from Badhra in 1954 in undivided Punjab. In 1982, she was again elected from the segment on the Lok Dal ticket.

In the 1968 and 1972 Assembly elections, she won from Loharu on the Congress ticket.

Chandrawati left the Congress after she was sacked from the Cabinet by then Chief Minister Bansi Lal in 1974. Subsequently, she joined the anti-Congress forces (Lok Dal, Janata Party and later Janata Dal).

Kanwar Pal Joon, a relative and close aide of Chandrawati, recalled that Indira Gandhi used to like her very much and called her Chandro.

“Chandrawati told me once that Indira Gandhi had asked her to join back the Congress and assured her the CM post. But Chandrawati opted to stay with the Janata Party,” he said.

Chandigarh: CM Manohar Lal Khattar and Leader of Opposition Bhupinder Singh Hooda have expressed condolences to the family of former Lt Governor of Puducherry Chandrawati on her demise. TNS 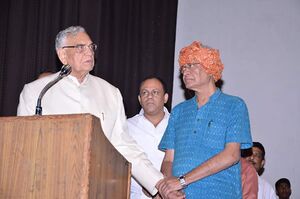 Back to The Leaders/Famous Jat women