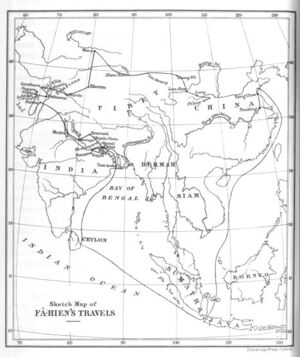 Location of Chang'an on Fahian's route

Chang'an means "Perpetual Peace" in Classical Chinese. During the short-lived Xin dynasty, the city was renamed "Constant Peace" (pinyin: Cháng'ān); yet after its fall in AD 23, the old name was restored. By the time of the Ming dynasty, the name was again changed to Xi'an, meaning "Western Peace", which has remained its name to the present day.

The strategic and economic importance of ancient Chang'an was mainly due to its central position. The roads leading to Gansu, Sichuan, Henan, Hubei and Shanxi all converged here. The mountainous country surrounding the Wei River basin led to the existence of only two practicable roads through to the south, and two through mountainous Gansu to the west, forming the beginning of the ancient Silk Routes.

Chang'an had been settled since the Neolithic times, during which the Yangshao Culture established in Banpo in the city's suburb. Also in the northern vicinity of the modern Xi'an, the tumulus ruler Qin Shi Huang of Qin dynasty held his imperial court, and constructed his massive mausoleum guarded by the famed Terracotta Army.

From its capital at Xianyang, the Qin dynasty ruled a larger area than either of the preceding dynasties. The imperial city of Chang'an during the Han dynasty was located in northwest of today's Xi'an. During the Tang dynasty, the area to be known as Chang'an included the area inside the Ming Xi'an fortification, plus some small areas to its east and west, and a major part of its southern suburbs. The Tang Chang'an hence, was 8 times the size of the Ming Xi'an, which was reconstructed upon the premise of the former imperial quarter of the Sui and Tang city.

During its heyday, Chang'an was one of the largest and most populous cities in the world. Around AD 750, Chang'an was called a "million people's city" in Chinese records.

James Legge[1] writes that Fa-hien had been living in Ch’ang-gan. Ch’ang-gan is still the name of the principal district (and its city) in the department of Se-gan, Shen-se. It had been the capital of the first empire of Han dynasty (B.C. 202-A.D. 24), as it subsequently was that of Suy dynasty (A.D. 589-618). The empire of the eastern Tsin, towards the close of which Fa-hien lived, had its capital at or near Nan-king, and Ch’ang-gan was the capital of the principal of the three Ts’in kingdoms, which, with many other minor ones, maintained a semi-independence of Tsin, their rulers sometimes even assuming the title of emperor.