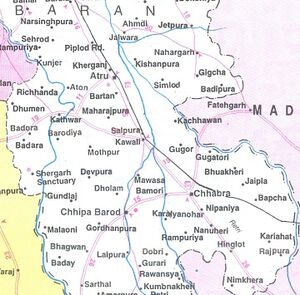 Googor (गूगोर) (Gugor) is a village in Chhabra tahsil in Baran district in Rajasthan.

Raghogarh was dominion of Khichi Chauhans. Hindupat Raja Lal Singh (1673-97 A.D.) was the founder of the State of Raghogarh. Raja Lal Singh resided in Jharkon in Ahirwara in Pargana Balabhent where he found a 'saptdhat' statue of Rama (Raghu) on the top of a hill. He established this statue in the fort palace of Raghogarh in V. 1734 (1677 A.D.) (Magh Sudi 5) on an elevation in the village of Kotda.

Gugor Fort - Chhabra Gugor or Gugor was always prone to be invaded by the Hadas from Baran. The Kheechi rulers had been on the lookout for a more suitable and central place to make it their third capital after they had ruled from Gugor for a period of 400 years. With the transfer of the capital to Raghogarh, Gugor was added to the Thikana of Chhabra which came to be called Chhabra Gugor, as it is known at present.

Lal Singh was a brave warrior and built mansions and temples, dug tanks and baories and laid garden. He gave land to temples. Lal Singh was the son of Raja Garibdas. Among his three brothers one got the thikana of Bhamawad, he is ancestor of the Rajas of Garha-Jamner, the second one got Maksudangarh, a branch of Raghogarh and Ajab Singh got Guna.