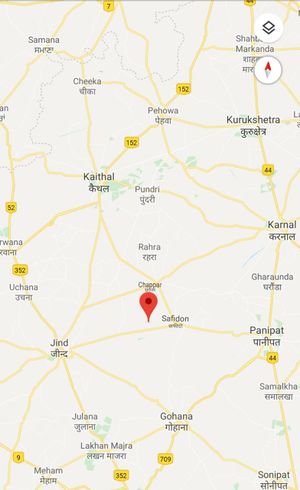 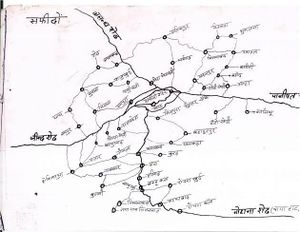 The village Chhapar is situated 8 km from Safidon Tehsil at the bank of Western Yamuna Canal of Hansi Branch. It lies at the centre of three villages Moana,Singhana and Jaipur. It is well connected through roads on all four sides.

Chhapar is one of the oldest village of Safidon. The village got its name from a kind of home that people lived in olden times. It is said that people of this village used to live in houses which had shelters of stubbles locally called chapr (छपर) . By the passage of time and change of language and dialects it changed to Chhapar(छापर).

Before partition, Muslims of Rangad (रांगड) community used to live in Chhapar village. Some of them involved in trade and some in farming. After partition, they migrated to newly formed country Pakistan and left their houses and lands. As like Sikhs also had to migrate to India and most of them were Jats.

There was a Dhaliwal family residing in a village in Bhawalpur Princely State (modern day Bhawalpur, Panjab State, Pakistan). The family basically found its roots from Kalewala Village, District Gujranwala, Punjab, Pakistan and they came on their maternals agricultural land in village Chak No. 2 , Bhawalpur about 50 years ago from the partition. They were locally called Dhaliwal Sardars as they owned a large tract of fields of 550 acres. They remembered Sardar Kahan Singh Dhaliwal as their oldest ancestor.

In 1947 , they moved to India and stayed for few months at Ganganagar , Rajasthan . Then they had to shift to refugee camp at Karnal and after sometime under resettlement programme they were alloted agricultural lands in Chappar Village. At that time , the lands were just in forest form. The Dhaliwal Sardars with their hard work turned down the forests into fertile agricultural land. The famous Dhaliwal was Sardar Balwant Singh Dhaliwal who was the first Lamberdar of the village. He was also a famous personality of Safidon Tehsil. He donated a large part of his land to the poor and needy people.