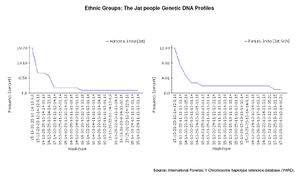 In Jatt families great pride is placed in their ancestry and Jatt family history. In fact, all the Jats in a particular village consider themselves to be the descendants of the man whom they believe founded it. Increasingly, in modern times Jatt families in West (e.g. UK, US, Canada & etc) are using DNA records to keep and maintain their Jatt family records. There's an old saying that "every Jat at heart is a family genealogist", interested in every aspect of their Jatt family history and how they are blood related to other relatives & other Jatt families. The average price of a DNA test can vary from $100 to $200. In South Asia (India & Pakistan) it can be done much cheaper due to lower labour costs.

A DNA test can even be used to check & prove if someone with the same Jatt Surname or Jatt gotra is related to you.

David G. Mahal and Ianis G. Matsoukas[1] conducted a scientific study on Y-STR Haplogroup Diversity in the Jat Population of which brief Conclusion is as under: