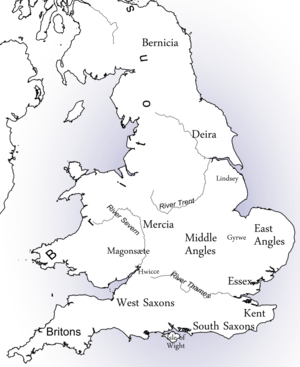 Deira was an Anglo-Saxon kingdom[1] in Northern England.

The kingdom was previously inhabited by Britons and was first recorded when Anglian warriors invaded the Derwent Valley in the latter half of the fifth century.[2] Deira’s territory extended from the Humber to the Tees, and from the sea to the western edge of the Vale of York. It later merged with the kingdom of Bernicia, its northern neighbour, to form the kingdom of Northumbria.

Daru (दारु) is mentioned by Panini in Ashtadhyayi. [3]

The name of the kingdom is of Brythonic origin from Daru, meaning "oak", (Derw in modern Welsh) in which case it would mean "the people of the Derwent", a derivation also found in the Latin name for Malton, Derventio.[5] The modern Gaelic 'Doire' (pronounced Dirruh/Durruh) is the same word. The origin of the name for County Londonderry and city of Derry stems from this word with an oak being featured on the crest of Derry GAA.

According to Simeon of Durham (writing early in the 12th century), it extended from the Humber to the Tyne, but the land was waste north of the Tees. After the Brythonic kingdom centred on Eboracum, which may have been called Ebrauc, was taken by King Edwin, the city of Eboracum became its capital, and Eoforwic ("boar-place") was taken by the Angles.

The first Anglian king of Deira of whom we have any record is Ælla, who flourished in the later 6th century after conquering the realm from the Britons in 581. After his death, Deira was subject to king Æthelfrith of Bernicia, who united the two kingdoms into Northumbria. Æthelfrith ruled until the accession of Ælla's son Edwin, in 616 or 617, who also ruled both kingdoms until 633.

Osric, the nephew of Edwin, ruled Deira after Edwin, but his son Oswine was put to death by Oswiu in 651. For a few years subsequently, Deira was governed by Æthelwald son of Oswald of Bernicia.

Bede wrote of Deira in his Historia Ecclesiastica (completed in 731).