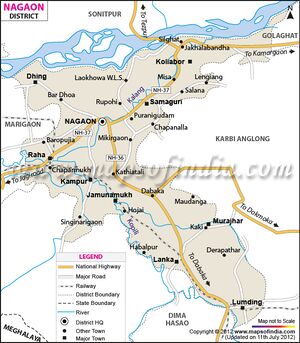 Davaka (डावक) was a kingdom of ancient India, located in current central region of Assam state.[1] It may be identified with Dabak town in Nagaon district, Assam.

The references to Davaka comes from the 4th century Allahabad pillar inscription of Samudragupta, where it is mentioned as one of five frontier kingdoms of the Gupta Empire; the Shung-Shu History of the Liu Song dynasty, where the kingdom is named Kapili (now the name of a river); the Gachtal stone pillar inscription written in Kamrupi language.[3] N K Bhattasali has identified it with Dabaka in modern Nagaon district, with the kingdom associated with the Kopili-Kolong river valley.[4][5]

In 4th-century Davaka was mentioned as frontier kingdom with Kamarupa in the Samudragupta's Prayaga stone inscription. Historians like Kanak Lal Barua (1933) claim Davaka was an aboriginal Austric-Dravidian kingdom which was later absorbed by 6th or 7th century by western kingdom of Kamarupa,[6] though later historians like B N Puri (1968) and P C Choudhury (1959) claim that it was absorbed much earlier in the first half of the 5th century during the reign of Kalyana Varman (422-446).[7][8]

Its capital was located near Kapili river. In the year 428 A.D, an embassy was sent to China by Davaka king, whose name according to Chinese sources is Yuegnai or Yu Chai.[9]