The term Delhi Sultanate is generally referred to a Muslim kingdom based mostly in Delhi that stretched over large parts of the Indian subcontinent, for about 320 years (1206–1526).

During 8th and 9th centuries, Hindu and Buddhist kingdoms in south Asia were under a wave of raids from Muslim armies, mostly from Central Asia. Among them was Mahmud of Ghazni, who raided and plundered kingdoms in north India from east of the Indus River to west of Yamuna River seventeen times between 997 and 1030. He raided the treasuries but retracted each time, only extending Islamic rule into western Punjab, after which some more Muslim warlords continued plundering and looting these kingdoms. These raids, however, did not establish or extend permanent boundaries of their Islamic kingdoms. The so-called Delhi Sultanate came into existence only in 1206, the first Sultan of which was Qutb-ud-din Aybak.

Broadly, five dynasties ruled over Delhi Sultanate, the first four of which were of Turkic origin:

Destructions of monuments carried out by Delhi Sultanate 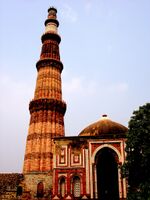 The Delhi Sultanate caused destruction and desecration of politically important monuments and temples in India. One example is the Qutub Minar in Delhi, which, in the opinion of many historians, was built several centuries before "Delhi Sultanate" was born. They opine that this structure was actually built by Indian astronomers, in memory of Varahamihira (505 - 587 AD), (or Mihira), an Indian astronomer, mathematician, and astrologer. Its initial name was "Dhruv-stambha" - ध्रुव स्तम्भ, and it was a famous observatory. The adjoining village Mehrauli is actually named after Varahamihira. The word Mihirawali (or Mehrauli - महरौली) consists of two letters - Mihir + Avali (मिहिर + अवली = मिहिरावली), meaning, the creation of Mihira or Varahamihira. The main gate of Qutub Minar points to the north, i.e. towards Pole Star (or Northern Star). In Arabic lanaguage, "Qutb" means "north" and the Pole Star (ध्रुव तारा) is called Qutbi Tara - कुतबी तारा). A compass needle, which always points towards the north, is called Qutubi Sui (कुतुबी सूई) in Arabic. Hence, Qutb Minar means - "the northward building". Here, in the context of Qutub Minar, the word "Qutb" (or "Qutub") does not mean that Qutub Minar is named after Qutb-ud-din-Aibak[1] who actually destroyed 27 small stone-temples around it and those stones were used for building a mosque at the same spot.

A certain reference in literature suggests that in 1193, the ancient college-city of Nalanda and the university of Vikramshila were sacked by Bakhtiyar Khilji.[2] [3]

The Persian historianMinhaj-i-Siraj, in his chronicle the Tabaqat-i-Nasiri[4], reported that thousands of monks were burned alive and thousands beheaded as Khilji tried his best to uproot Buddhism. The burning of the library continued for several months and "smoke from the burning manuscripts hung for days like a dark pall over the low hills."[5] Buddhist sources hold him responsible for the destruction of Nalanda.[6][7]

The Delhi Sultanate reached its peak in terms of geographical reach, during the Tughlaq Dynasty, covering most of Indian subcontinent. The sultanate declined thereafter, with continuing wars with Indian Kings in different states such as Vijayanagar Kingdom and new Muslim sultanates such as Bengal Sultanate. In 1526, The Delhi Sultanate fell and was replaced by the Mughal Empire.