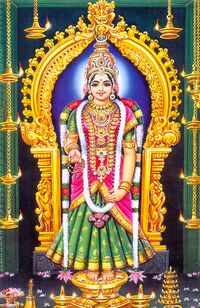 Devi Kanya Kumari (देवी कन्या कुमारी) is goddess Parvati in the form of an adolescent girl child. Devi is also known as Shree Baala Bhadra or Shree Baala. She is popularly known as "Shakti" (Parvati) "Devi".

The Bhagavathy Temple is located in Cape Kanya Kumari in Tamil Nadu, at the southern tip of main land India, there by located on the confluence of the Bay of Bengal, the Arabian Sea, and the Indian Ocean. She is also known by several other names, including Kanya Devi and Devi Kumari. She is also worshiped as Shree Bhadrakali by devotees. Sage Parashurama is said to have performed the consecration of the temple.

Kanyakumari Temple is one of the 51 Shakti Peethams. It is believed that the right shoulder and (back) spine area of Sati's corpse fell here creating the presence of kundalini sakthi in the region.

There is a temple of Lord Ganesha near the pucca ghat at the confluence of the three seas/oceans, which one must visit before entering the temple. Some believe that the [Bhadra Kali]] Temple within Kanya Kumari Temple is the Shakti Peeth.

As directed by his Guru Sri Ramakrishna Paramahamsa, Swami Vivekananda, came here to seek Devi's blessing in December 1892. It is in this location he decided to embark on the missionary work to a higher level of action rather than being passive like the usual Sanyasis. Swami Brahmananda (1863–1922) and Swami Nirmalananda (1863–1938), another two disciples of Sri Ramakrishna Parama Hamsa, also worshiped Devi Kanyakumari. In fact, Swami Nirmalananda brought several small girls from many parts of Kerala to worship goddess here in 1935-36 period. Seven girls later on became the members of the first batch of Nuns of the "Sarada Ashrama", a Hindu nunnery started later in 1948 in Ottapalam, Palakkad, Kerala by Swami Vishadananda.

Kanyakumari is situated on the southernmost tip of Indian Ocean of Tamil Nadu. The worship of Devi Kanya Kumari here dates back to the Kumari Kandam. Kanya Kumari is a Hindu goddess. Since Lord Shiva didn't keep his promise to marry her on one particular day, she was very upset and angry, and her anger was diverted to kill the demons, followed by continuous penance.

Devi Kanya Kumari has been mentioned in Ramayana, Mahabharata, and the Sangam works Manimekalai, Puranaanooru and Nārāyaṇa (Mahānārāyaṇa) Upanishad, a Vaishnava upanishad in the Taittiriya Samhita of Krishna Yajur Veda.[1]

The author of Periplus of the Erythraean Sea (60-80 A.D.) has written about the prevalence of the propitiation of the deity Kanyakumari in the extreme southern part of India; "There is another place called Comori and a harbour, hither come those men who wish to consecrate themselves for the rest of their lives, and bath and dwell in celibacy and women also do the same; for it is told that a goddess once dwelt here and bathed."[2] [3]

Kanyakumari was under the rule of the Chera Dynasty followed by Venad Rulers and kings of Travancore under the overall suzerainty of the British until 1947, when India became independent. Travancore joined the independent Indian Union in 1947. Later in the state partition Kanyakumari became part of Tamil Nadu. [4]

The feminine aspects of The Almighty (in its manifested and un-manifested forms) are called as Prakriti, and the male aspects are called as Purusha. The Prakriti is addressed in different names by different Hindu communities as Adi-parashakti, Bhadra, Shakti, Devi, Bhagavathi, Amman, Rajarajeshwari, Shodashi; in different locations.[1][4] All the material manifested aspects the Nature is classified as feminine and is the Prakriti or Mother Goddess and also the un-manifested forms Knowledge, Prosperity and Power are considered as feminine Prakriti, and it is source of energy for Creation, Sustain and Control, which is the male aspect (Purusha) of Prabrahma.[5]

The mythological story dates back to the prehistoric Tamil period. Banasura was the ruler of his land. He was a very powerful king. He practiced tapasya and obtained a boon from Lord Brahma that his death will only be by an adolescent young girl.[6][7]

With this powerful boon, he became fearless and wreaked havoc on the entire world. He went on to conquer and oust Lord Indra from his throne. He banished all the devas’ from there. The devas’ who were the personification of the basic natural elements, Agni (fire), Varuna (water), Vayu (air) went uncoordinated and havoc spread in the universe, because Indra (ether) was not able to administer and coordinate the Pancha bootha.[8]

It is believed that Bhagavathy, the unbiased Prakriti, can only bring order because she is the nature within which everyone lives and hence is unbiased. Bhagavathy manifested herself in the Southern tip of the Aryavartha, to kill Bana and recur the balance of nature.[9] As an adolescent girl, she had immense devotion towards Lord Shiva. Then, Lord Shiva decided to marry her. All arrangements were made for the marriage. Lord Shiva started the journey from Shuchindram for the marriage. The marriage muhurat (muhurtam or auspicious time) was in the Brahma muhurtam early in the morning. Narada made the sound of a cock sending wrong information that the Sun had already risen and the auspicious time passed. The marriage procession returned. Sage Narada realized Bana could only be killed by a young girl and thus interrupted Shiva’s marriage with Bhagavathy [10] Devi waited for Lord Shiva and finally, she thought that she had been snubbed. With unbearable insult, pain, grief, and anger she destroyed everything she saw. She threw away all the food and broke her bangles. When she finally gained her composure she undertook continuous penance. Ages later Bana, tried to lure and approach the goddess without realizing who she was. The infuriated Bhagavathy, who was the Bhadrakali herself, slaughtered Bana at once. Moments before his death Bana realized that the one before him was Shakti, the Almighty itself. He prayed her to absolve him of his sins. After killing Bana, Devi assumed her original form of Parvati and reunited with her husband Shiva. Bhagavathy maintained her divine presence in the place, in the Devi Kanyakumari Temple.[11]

The food particles she scattered around are said to be the source of the colourful sands of Kanyakumari.

The presiding image is sported in standing posture with an Akshamala in her hands. There is an image of a lion in her pedestal indicating that she is the form of Parvati. There is a four-pillar hall in the temple, each of which gives out sounds of Veena (a string instrument), Mrudanga (a percussion instrument), flute and Jalatharanga (porcelain instrument).[12]