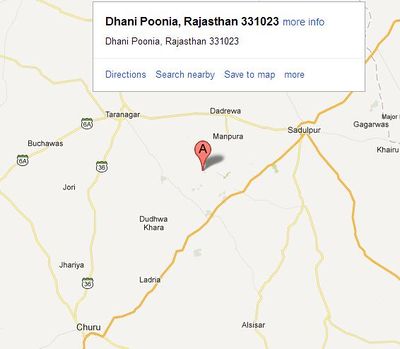 Dhani Poonia or Poonia Ki Dhani (ढाणी पूनियां) is a small village in Taranagar tehsil of Churu district in Rajasthan. 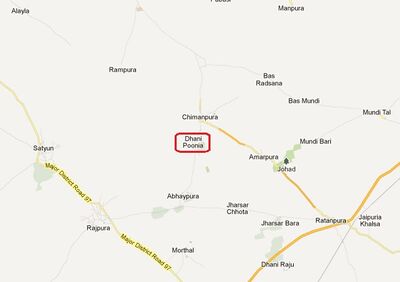 It is situated in 50km northeast direction of Churu and 27km southeast of Taranagar. Its neighbouring villages are Jharsar Chhota, Chimanpura, Rajpura, Satyun.

The main occupation of the villagers is agriculture. There are 40 persons serving the Indian Army, Central and State Govts. About 15 people have gone to Arab countries for earning.

Dhani Poonia is considered to be a progressive village of the region. Presently there is a Government Upper Primary School. For Secondary and Higher Secondary education students go to Chimanpura and Taranagar.

All people belong to Hindu religion. There is one temple of Hanumanji and one Medi of Gogaji.