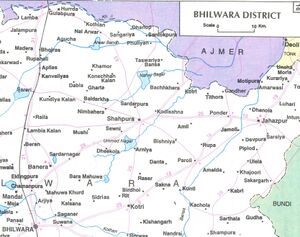 Location of Places around Shahpura

It is located on Shahpur-Vijaypur state highway at a distance of 85 km from Bhilwara city in Rajasthan. Its PIN code is 311030. It has a population of 3592 as of 2001 census, out of them 616 are Scheduled Caste and 30 Scheduled tribe people. It is known for Dhanop Sheetla Mata Temple. [1] 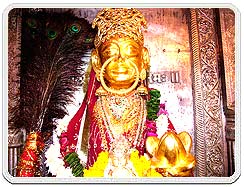 Sheetla Mata Temple shaktipith is situated at Dhanop. Dhanop is a little village near Bhilwara with only the Sheetla Mata Temple to boast of. But it makes for an interesting visit as it’s the most colourful temple around. The walls and pillars are bright red while the roof is sparkling white. The floor is of marble, and a checkered one at that. In the complex is a neem (Azadirachta indica) tree which looks more like a Christmas tree. This is because of the hundreds of colourful pieces of cloth which devotees have tied around its branches in the belief that it will fulfill their wishes. Anyway, the main idol of the goddess Sheetla (a form of Durga) is of black stone with patches of sindoor (vermilion) on it. Same is the case with the stone walls in the inner sanctum. The ceiling, too, has some bright floral paintings.[2]

Sheetla Mata shaktipith situated at Dhanop is believed to be about 1100 years old. Local tradition tells that in vikram samvat 1150 Raja Dhundhmar camped here on navaratra with his army while coming from Hadauti. He worshipped the goddess here. Earlier the name of this place was Tamvavati (तम्वावती) which was changed to Dhanop by Raja Dhundhmar. The place is now famous after Dhanop Mata Temple. There are statues of goddess in five forms such as Annapurna, Ashtbhuja, Chamunda, Bisbhuja and Kalika. There are six gumbadas and a big shikhara on the top of the temple. There is one statue of lion. On the right side is aughadnath, on left is Shiva-Parvati, Kartikeya, rddhi-siddhi Ganesha, and chausath joganis. The sabhamandapa of the temple is believed to be constructed during the rule of Prithvi Raj Chauhan. It is said that after war with Jaychand, the ruler of Kanauj, the treaty took place at this spot. A huge fair is organized here during navaratra. [3]Large number of devotees come from far-off places. The priests are appointed in rotation for two months. The serving priest can not visit his home during this period. [4]