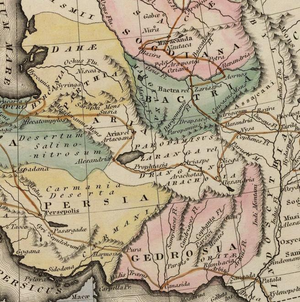 Drangiana on Map showing the route of Alexander the Great 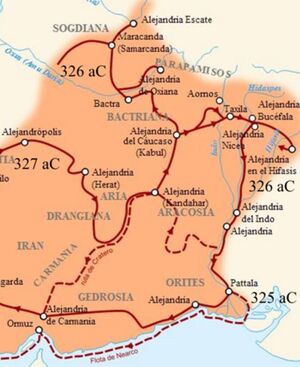 Drangiana (द्रांगियाना) was the ancient name of Baluchistan province in Pakistan. It is also called Zarangiana (Greek: Δραγγιανή, also attested in Old Western iranian as Zranka[1] was a historical region and administrative division of the Achaemenid Empire. It may be identified with modern Zaranj in Iran. Rajatarangini has mentioned it as Dranga (द्रंग). [2]

This region comprises territory around lake Hâmûn, wetlands in endorheic Sīstān basin on the Irano-Afghan-Pakistan border, and its primary watershed Helmand river in what is nowadays southwestern region of Afghanistan and the Chagai region of western Pakistan.

In ancient times Drangiana was inhabited by an Iranian tribe which the ancient Greeks called Sarangians or Drangians. Drangiana was possibly subdued by another Iranian people, the Medes, and later, certainly, by the expanding Persian Empire of Cyrus the Great (559-530 BC).[3]

According to Herodotus, during the reign of Darius I (522-486 BC), the Drangians were placed in the same district as the Utians, Thamanaeans, Mycians, Drangians, and those deported to the Persian Gulf.

The capital of Drangiana, called Zarin or Zranka (like the Province), is identified with great probability with the extensive Achaemenid site of Dahan-e Gholaman southeast of Zabol in Iran.[4] Another significant center was the city of Prophthasia, possibly located at modern Farah in Afghanistan.[5] On occasion Drangiana was governed by the same satrap as neighboring Arachosia. In 330-329 BC, the region was conquered by Alexander the Great.[6] Drangiana continued to constitute an administrative district under Alexander and his successors. At Alexander's death in 323 BC, it was governed by Stasanor of Soloi, and later, in 321 BC, it was allotted to another Cypriot, Stasandros. By the end of the 4th century BC, Drangiana was part of the Seleucid Empire, but in the second half of the 3rd century BC it was at least temporarily annexed by Euthydemos I of Bactria. In 206-205 BC Antiochos III (222-187 BC) seems to have recovered Drangiana for the Seleucids during his Anabasis. The history of Drangiana during the weakening of Seleucid rule is unclear, but by the mid-2nd century BC the area was conquered by the expanding Parthian Empire of the Arsacids.[7] == In Rajatarangini

Rajatarangini[8] tells us ... At this time, in the mouth of Shravana, the grateful king (Simhadeva) went to Vijayeshvara to welcome the victorious lord of Kampana. In the meantime Utpala who was coming from Pinchadeva at Shurapura was murdered by the lord of Dranga in a mountain cavern. He was returning from Pushpananada in order to serve Pinchadeva, when he was found out by the lord of Dranga who was secretly looking out for him. But the lord of Dranga was thrown on the ground and was on the point of death. His knee was pierced with arrow. He killed a soldier of the enemy's party whom he found by him. The king, after he had bestowed favors on the lord of Kampana, was on his return. He stopped at the gate of Avantipura when Sura of Dranga bowed to him.[VIII (i), p.136]

Rajatarangini[9] tells that....Koshtaka imprisoned the chiefs of the several departments of government, and, like a king,- collected rent from the subjects in Dranga, in his own name, and left no money in Sindhu. (VIII (i), p.178)

Rajatarangini[10] tells that....Pinjadeva, lord of Dranga, attended by a handful of warriors, such as were not sufficient even to count the soldiers of Lothaka, sent the latter in the direction of death or in the river. A multitude of blazing pyres were reflected in the river, and it seemed, as if the last rites of those who were drowned were being performed. Thus one day, Lothaka, forgetful of death, and taking with him his faithful men, fought an arduous battle and on the next day, he was beaten back with a broken force. He had thought that it would be easy to take within two or three days that lonely town in which he had collected an army from all sides. [VIII (ii),p.255]