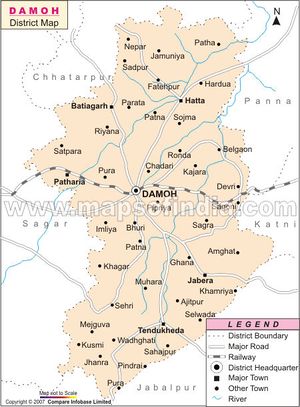 Damoh (दमोह) is a city and district in Madhya Pradesh.

History of Damoh town and region

From Mauryas to Guptas

(Deposited in the Nagpur Museum)

This record is in Rajasthani and Sanskrit, the one being a free translation of the other. It recites that one Vijayapala was born in the Visvamitra gotra. He conquered a great hero named Kāī. His son was Bhuvanapala, whose son Harsharaja is stated to have defeated the kings of Kalanjara, Dahali (Dāhal), Gurjara and the Deccan, Harsharaja's son was Vijayasimha, a virtuous man devoted to Bhambhukadeva. He is said to have fought at Chittor, conquered the Delhi armies, scattered the Deccan forces close to Mahāgadh, and driven out the Gurjaras.

The absence of any regal title indicates that the persons named in the record were perhaps commanders of armies who overran a number of countries, including Dahala, the Kalachuris' kingdom, which included Damoh. They left no trace of their raid except this inscription, the language of which points to their home in Rajasthan.

It is possible that they may have been related to the Guhila Princes of Mevar. In that dynasty there was one Vijayasimha who married Syamaladevi, daughter of Udayaditya of Malwa, by whom he had a daughter Alhanadevi who married Gayakarna of Dahala. Unfortunately the stone is broken, so that if there was any date it is lost.

Source - Hira Lal:Descriptive lists of inscriptions in the Central provinces and Berar, p.49

(Deposited at the Deputy Commissioner's Bungalow?}

This inscription is said to have been fixed to the western gate of the Damoh fort which has now altogether disappeared. It records that the breastwork opposite the western gate of the fort at Damoh was built by Ghiyas-ud- duniya in the year 885 on the 24th of Shawwal, corresponding to 1480 A. D. The record refers to the Malava king Ghiyasuddin (called in the inscription Ghiyas-ud-duniya) who ruled be ween 1475 and 1500 A. D.

Reference - Hira Lal: Descriptive lists of inscriptions in the Central provinces and Berar,p.53