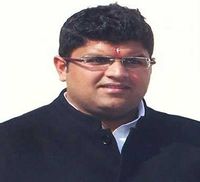 Dushyant was born in Hisar on April 3, 1988. He passed his CBSE examination in 2004 from Lawrence School, Sanawar. Later, he got B.Sc degree in Business from California State University, Bakersfield (USA) in 2011.

In April 2014, he filed his nomination papers for the Indian Lok Sabha elections at the age of 25 years and 11 months, from Hisar Lok Sabha constituency.. On 16 May 2014, he and won the election and thus, was apparently the youngest Member of Parliament at the age of 26 years and 1 month.

However, during Lok Sabha elections held in May 2019, he could not win when he fought election from Hisar constituency as the candidate of newly-formed JJP party. He was defeated by BJP candidate, Brijendra Singh Shokeen.

In this election, the ruling BJP won only 40 seats in a 90-member Assembly, thus short of 7 votes to form a government. Then, BJP decided to form a coalition government along with JJP. On 27 October 2019, BJP's Manoharlal Khattar was sworn in as Chief Minister of Haryana, and Dushyant Chautala took the oath as Deputy Chief Minister.