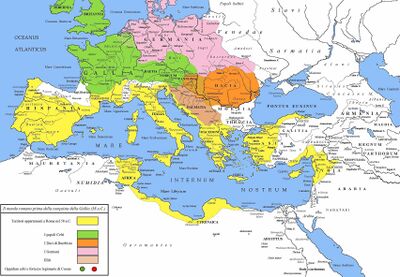 The Roman republic and its neighbours in 58 BC

Galatia was an area in the highlands of central Anatolia (Ankara, Çorum, Yozgat Province) in modern Turkey.

Galatia was named for the immigrant Gauls from Thrace (cf. Tylis), who settled here and became its ruling caste in the 3rd century BC, following the Gallic invasion of the Balkans in 279 BC. It has been called the "Gallia" of the East, Roman writers calling its inhabitants Galli (Gauls or Celts).

Latin Gallus (pl. Galli) might stem from a Celtic ethnic or tribal name originally, perhaps one borrowed into Latin during the Celtic expansions into Italy during the early fifth century BC. Its root may be the Proto-Celtic *galno, meaning "power, strength", hence Old Irish gal "boldness, ferocity" and Welsh gallu "to be able, power". The tribal names of Gallaeci and the Greek Γαλάται (Galatai, Latinized Galatae; see the region Galatia in Anatolia) most probably have the same origin.[1] The suffix -atai might be an Ancient Greek inflection.[2] Classical writers did not apply the terms Κελτοί or Celtae to the inhabitants of Britain or Ireland, which has led to some scholars preferring not to use the term for the Iron Age inhabitants of those islands.[3]

Galatia was bounded on the north by Bithynia and Paphlagonia, on the east by Pontus and Cappadocia, on the south by Cilicia and Lycaonia, and on the west by Phrygia. Its capital was Ancyra (i.e. Ankara, today the capital of modern Turkey).

Celtic Galatia: The terms "Galatians" came to be used by the Greeks for the three Celtic peoples of Anatolia: the Tectosages, the Trocmii, and the Tolistobogii.[6][7] By the 1st century BC the Celts had become so Hellenized that some Greek writers called them Hellenogalatai (Ἑλληνογαλάται).[8] The Romans called them Gallograeci.[9] Though the Celts had, to a large extent, integrated into Hellenistic Asia Minor, they preserved their linguistic and ethnic identity.[10]

By the 4th century BC the Celts had penetrated into the Balkans, coming into contact with the Thracians, Macedonians and Greeks.[11] In 380 BC they fought in the southern regions of Dalmatia (present day Croatia), and rumors circulated around the ancient world that Alexander the Great's father, Philip II of Macedonia had been assassinated by a dagger of Celtic origins.[12][13] Arrian writes that "Celts established on the Ionic coast" were among those who came to meet Alexander the Great during a campaign against the Getae in 335 BC.[14] Several ancient accounts mention that the Celts formed an alliance with Dionysius I of Syracuse who sent them to fight alongside the Macedonians against the Thebans.[15] In 279 BC two Celtic factions united under the leadership of Brennus and began to push southwards from southern Bulgaria towards the Greek states. According to Livy, a sizable force split off from this main group and head toward Asia Minor.[16]

For several years a federation of Hellespontine cities, including Byzantion and Kalchedon prevented the Celts from entering Asia Minor but this changed when Nikomedes I of Bithynia allied with some of the Celtic leaders in a war against his brother Zipoetes and the Seleucid king Antiochus I. When the Celts finally entered Asia Minor chaos ensued until the Celts were briefly routed by Antiochus' army in the Battle of Elephants. In the aftermath of the battle the Celts withdrew to Phrygia, eventually settling in Galatia.[17][18] The territory of Celtic Galatia included the cities of Ancyra (present day Ankara), Pessinus, Tavium, and Gordion.[19]

Roman Galatia: Upon the death of Deiotarus, the Kingdom of Galatia was given to Amyntas, an auxiliary commander in the Roman army of Brutus and Cassius who gained the favor of Mark Antony. After his death in 25 BC, Galatia was incorporated by Augustus into the Roman Empire, becoming a Roman province. Near his capital Ancyra (modern Ankara), Pylamenes, the king's heir, rebuilt a temple of the Phrygian god Men to venerate Augustus (the Monumentum Ancyranum), as a sign of fidelity. It was on the walls of this temple in Galatia that the major source for the Res Gestae of Augustus were preserved for modernity. Few of the provinces proved more enthusiastically loyal to Rome.

Josephus related the Biblical figure Gomer to Galatia (or perhaps to Gaul in general): "For Gomer founded those whom the Greeks now call Galatians, [Galls], but were then called Gomerites."[20] Others have related Gomer to Cimmerians.

Paul the Apostle visited Galatia in his missionary journeys,[21] and wrote to the Christians there in the Epistle to the Galatians.

Although originally possessing a strong cultural identity, by the 2nd century AD, the Galatians had become assimilated (Hellenization) into the Hellenistic civilization of Anatolia.[22] The Galatians were still speaking the Galatian language in the time of St. Jerome (347–420 AD), who wrote that the Galatians of Ancyra and the Treveri of Trier (in what is now the Rhineland) spoke the same language (Comentarii in Epistolam ad Galatos, 2.3, composed c. 387).

In an administrative reorganisation (c. 386–395), two new provinces succeeded it, Galatia Prima and Galatia Secunda or Salutaris, which included part of Phrygia. The fate of the Galatian people is a subject of some uncertainty, but they seem ultimately to have been absorbed into the Greek-speaking populations of Anatolia.

Arrian[23]The next day he (Alexander) sent out to Ancyra[1] in Galatia, where he was met by an embassy from the Paphlagonians, offering to surrender their nation to him and to enter into an alliance with him; but they requested him not to invade their land with his forces. He therefore commanded them to submit to the authority of Galas, the viceroy of Phrygia. Marching thence into Cappadocia, he subjugated all that part of it which lies on this side of the river Halys[2] and much of that which lies beyond it. Having appointed Sabictas viceroy of Cappadocia, he advanced to the Gates of Cilicia,[3] and when he arrived at the Camp of Cyrus, who (went) with Xenophon,[4] and saw that the Gates were occupied by strong guards, he left Parmenio there with the regiments of infantry which were more heavily armed; and about the first watch, taking the shield-bearing guards, the archers, and the Agrianians, he advanced by night to the Gates, in order to fall upon the guards when they least expected it. However, his advance was not unobserved; but his boldness served him equally well, for the guards, perceiving that Alexander was advancing in person, deserted their post and set off in flight. At dawn next day he passed through the Gpates with all his forces and descended into Cilicia.[5] Here he was informed that Arsames had previously intended to preserve Tarsus for the Persians; but when he heard that Alexander had already passed through the Gates, he resolved to abandon the city; and that the Tarsians were therefore afraid he would turn to plunder their city and afterwards evacuate it. Hearing this, Alexander led his cavalry and the lightest of his light infantry to Tarsus with a forced march; consequently Arsames, hearing of his start, fled with speed from Tarsus to King Darius without inflicting any injury upon the city.

Alexander now fell ill from the toils he had undergone, according to the account of Aristobulus; but other authors say that while he was very hot and in profuse perspiration he leaped into the river Cydnus[6] and swam, being eager to bathe in its water. This river flows through the midst of the city; and as its source is in mount Taurus and it flows through a clean district, it is cold and its water is clear. Alexander therefore was seized with convulsions, accompanied with high fever and continuous sleeplessness. None of the physicians thought he was likely to survive,[7] except Philip, an Acarnanian, a physician in attendance on the king, and very much trusted by him in medical matters, who also enjoyed a great reputation in the army in general affairs. This man wished to administer a purgative draught to Alexander, and the king ordered him to administer it. While Philip was preparing the cup, a letter was given to the king from Parmenio, warning him to beware of Philip; for he heard that the physician had been bribed by Darius to poison Alexander with medicine. But he, having read the letter, and still holding it in his hand, took the cup which contained the medicine and gave Philip the letter to read. While Philip was reading the news from Parmenio, Alexander drank the potion. It was at once evident to the king that the physician was acting honourably in giving the medicine, for he was not alarmed at the letter, but only so much the more exhorted the king to obey all the other prescriptions which he might give, promising that his life would be saved if he obeyed his instructions. Alexander was purged by the draught, and his illness then took a favourable turn. He afterwards proved to Philip that he was a faithful friend to him; and to the rest of those about he proved that he had perfect confidence in his friends by refusing to entertain any suspicion of their fidelity; and at the same time he showed that he could meet death with dauntless courage.[8]

1. Now called Angora. In the time of Alexander the country was named Great Phrygia, the term Galatia being afterwards applied to it, from the fact that it was conquered by the Gauls in the 3rd century B.C.

2. Now called Kizil-Irmak, i.e. the Red River. It is the largest river in Asia Minor, and separated the empires of Persia and Lydia, until the conquest of the latter by Cyrus.

3. The chief pass over the Taurus between Cappadocia and Cilicia. It is more than 3,600 feet above the sea-level. Its modern name is Golek-Boghaz. Cf. Curtius, iii. 9-11. It is called Tauri Pylae by Cicero (Epistolae ad Atticum, v. 20, 2).

5. Curtius (iii. 11) says, that Alexander wondered at his own good fortune, when he observed how easily Arsames might have blocked up the pass. Cyrus the Younger was equally fortunate in finding this impregnable pass abandoned by Syennesis, king of Cilicia. See Xenophon (Anabasis, i. 2, 21).

7. Probably none of the physicians would venture to prescribe, for fear of being held responsible for his death, which seemed likely to ensue. Nine years after, when Hephaestion died of fever at Ecbatana, Alexander the physician who had attended him to be crucified. See Arrian, vii. 14; Plutarch (Alexander, 72).

8. Cf. Curtius, iii. 14-16; Diodorus, xvii. 31; Justin, xi. 8; Plutarch (Alex., 19). The barbarous conduct of Alexander towards Philotas four years after, when contrasted with his noble confidence in Philip, shows the bad effect of his unparalleled success, upon his moral character.