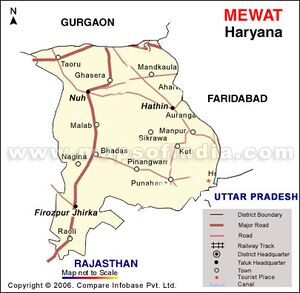 Ghasera is a village in Nuh tahsil of Mewat district in Haryana.

Ghasera is a Village in Nuh Tehsil in Mewat District of Haryana State, India. It belongs to Gurgaon Division . It is located 9 KM towards East from District head quarters Nuh. 3 KM from Nuh. 339 KM from State capital Chandigarh. Ghasera Pin code is 122103 and postal head office is Sohna. Chhachera ( 2 KM ) , Chhapera ( 2 KM ) , Salamba ( 4 KM ) , Rewasan ( 4 KM ) , Alduka ( 4 KM ) are the nearby Villages to Ghasera. This Place is in the border of the Mewat District and Palwal District. Palwal District in is East towards this place .[1]

Ghasera is an old village and dominated by Meo community. This was ruled by Bahadur Singh, a chieftain of Rajput clan of Badgujar sept who had hereditary enmity of the Ahir Rao of Rewari. The result of enmity was the groupism where Jaipur and Bharatpur united against him. In an attack in 1753, Maharaja Surajmal of Bharatpur devastated Ghasera in which Bahadur Singh was slain and the ladies of his household committed Jauhar by jumping in the well. [2]

The ruined Ghasera Fort lies at Ghasera village 14 kilometres from Nuh city on Nuh-Sohna road. The Jat ruler Maharaja Surajmal of Bharatpur killed the Rajput faujdar Bahadur Singh Bargujar of Koil (present day Aligarh on outskirts of (Palwal) and his son Ajit Singh in 1753 in the Battle of Ghasera. During the battle, the Jats laid siege to Ghasera, which lasted for 3 months and 15000 jats and their allies were killed by the gun fire from ramparts of Ghasera fort. On 23 April 1753, a desperate Bahadur Singh Bargurjar slayed all his women, opened the gates of the fort for the final battle to death during which he and his companions were killed. After this Jats sacked Delhi in 1754, forcing mughals to plead help from marathas, which finally resulted in a peace treaty between Jats and Marathas.[3]

Currently, of the four gateways only one remains along with the Ruined walls. in 1753.[1]

The friendship of Suraj Mal with wajir Safdarjand paid him the dividends. On 20 October 1752 Suraj Mal appeared before the samrat with wajir and he was awarded with the title of 'Kunwar Bahadur Rajendra' and his father Badan Singh as 'Raja Mahendra'. In December wajir gave Suraj Mal the Faujdari of Mathura and shahi jagir on Khalsa land. Thus Suraj Mal could legalize his possession over the shahi areas with the support of wajir.

In the early 1753, wajir cunsulted Suraj Mal to punish faujdar Bahadur Singh Bargujar of Koil, as both were suspecious of his friendship. They decided to attack Koil. Wajir obtained shahi orders and handed over the leadership of this expedition to Suraj Mal. [4] [5]Suraj Mal moved from Delhi for the war in first week of February 1753. Jawar Singh joined him after crossing Yamuna. Suraj Mal attacked Aligarh on 10 February and brought under his reign. Faujdar Bahadur Singh had to take shelter in his ancestral fort at Ghasera. [6], [7]

On the other-side Rao Bahadur Singh was ready with 8000 soldiers, sufficient food and weapons. On the first day of war, Rao had to retreat back on the eastern front. His brother Jalim Singh and son Ajit Singh were wounded. Rao returned to fort and started intensive artillery attack from inside the fort. Suraj Mal instructed his beldars to dig out the trenches and shift the army fronts to the outer boundary. The war continued for many days. [10] [11]

Due to the severity of war and its probability of continuing for longer period, Rao Bahadur Singh, under pressure of his people sent his wounded brother for negotiation with Suraj Mal. Suraj Mal put a proposal to leave the front on the condition of paying Rs 10 lakhs along with entire artillery to be handed over to him. The stubborn Rao did not agree to hand over cannons. Meanwhile Jalim Singh died. After few days Suraj Mal again tried for negotiations but could not succeed. Suraj Mal then ordered severe attack from all sides. A severe war took place on the night of 22 April 1753. Next day Mir Muhammad Panah along with 1500 jat soldiers were killed but Jat army could enter the fort. Bahadur Singh decided for the jauhar, he massacred all the women in the fort. Rao Bahadur Singh along with his son Ajit Singh and the soldiers fought the decisive war. The court poet Sudan of Suraj Mal, who was eye witness of the war, has described about their bravery impartially. [12] Rao Bahadur Singh along with his son Ajit Singh fought till last moment and were killed on 23 April 1753 and the fort of Ghasera was captured by Suraj Mal. [13] [14]

Girish Chandra Dwivedi[15] mentions.... [p.145]: The Jat Prince had every reason to be thankful to the gracious Wazir (Safdar Jang). He presently went to his home (TAH., 45a) but after a short while he returned to

[p.146]: the Capital and remained with Safdar Jang20 till he moved against Rao Bahadur Singh of Ghasira, the faujdar of chakla Kol (Aligarh). We shall now turn to this event.

It seems that a feud over land and other things existed between Suraj Mal and Rao Bahadur Singh Bargujar.21 The Wazir himself was angry with Rao probably over his treacherous collusion with Ahmad Bangash during his first Bangash expedition.22 The Bargujar presently joined the camp of Malharrao Holkar and the Jat Vakil justified the attack almost solely on this ground.23 Thus, the Wazir and Suraj Mal both dissatisfied, the former reportedly induced the Emperor to sanction the expedition under Suraj Mal.24

About the first week of February, 1753,25 Suraj Mal moved out and halted for some time at Samogar near the Yamuna in order to call up sufficient troops from his State. Since Bahadur Singh was at Kol, [[Suraj Mal]], with a picked force of 4,000 horsemen, marched to that place, leaving the rest of his forces at Samogar. Realizing the weakness of his position at Kol, Bahadur Singh avoided confrontation with the Jats there and managed his way to his stronghold of Ghasira. This was a spacious and fairly strong fort, containing sufficient quantities of artillery and munition and a garrison of 8,000. In addition, a rainwater pool stretching upto its southern and western ramparts provided it safety from those two sides. Meanwhile, as Rao fled, Suraj Mal occupied Kol and leaving a contingent there, hotly pursued him along his circuitous route upto Ghasira which he attacked from the north and the east.26

Rao, at the head of 5,000 matchlockmen and about 800 horse, came out of the eastern gate and offered battle to the Jats under the personal command of Suraj Mal. Rao fought most gallantly but was wounded and forced back. But on the northern side the Jats under Jawahar Singh, sustained heavy losses as a result of the gunfire from the fort. Suraj Mal

21. Sujan, 118; Also see author's article, 'Ghasira Ke Yudha Ka Aitihasik Paryalochan, Nagari Pracharini Patrika. Samvat 2024, 510-511. The story also goes that the Meenas of Ghasira stole away some camels belonging to Suraj Mal. But on being asked Rao returned neither the camels nor the culprits, which provoked the Jat Prince further.

25. TAH. 47a. This is the only other source to refer to this campaign but its account is very brief. Therefore, we have generally followed detailed description of Sujan Charitra, whose author, unlike that of the former, was obviously present on the spot.

[p.147]: ordered the impetuous Jawahar to dig up the trenches first and then resume the fight. But the next fortnight's desultory struggle brought no decisive results. Suraj Mal then closely inspected the southern and the western approaches to the fort. Discovering some dried up pockets along there, he shifted himself to the western side and sent Jawahar to the southern side and thus completely besieged Ghasira. Cannonade continued and a number of Jats fell victims daily. Yet in time the complete investment and the accompanying fight reduced the besieged to severe straits and they forced an unwilling Rao to send his envoy, Zalim Singh, to settle peace with Suraj Mal. The latter demanded Rupees 10 lakhs in cash and all the arms and munition of the fort as a precondition for raising the siege. Rao did not really mean to fulfil the exorbitant demands and yet he could not afford a total rejection either. He, therefore, practiced evasive tactics.

His dissimulation infuriated Suraj Mal and he resolved to get rid of Rao and capture Ghasira. The siege was pressed more vigorously. On 23rd April, 1753, (6th Krishna Paksha in Vaishakh) the valiant Jats under Paim Singh, Prithvi Singh, Raja Ram and Sayyid Mir Panah pushed forward, and despite the murderous gunfire, Ram and Sayyid Mir Panah pushed forward, and despite the murderous gunfire, succeeded in climbing up the fortwalls and opening the gates. Heavy was the carnage that the Jats suffered at Ghasira. Fifteen thousand of them perished but not before hopelessly thinning the enemy ranks as well. Yet Rao's forces could be destroyed but not his will. He went to the other fort, put his family to the sword, then rushed out with a hundred survivors and engaged Sheo Singh in a fierce combat. A bullet shot pierced through him, yet he bravely stood his ground till he was beheaded (along with a lone survivor) by Dalla Mev. Suraj Mal, thus, won a sanguinary contest. It was here at Ghasira that he received most pressing call for help, couched in rather flattering words, from the Wazir. He, therefore, left for Delhi, posting a Jat garrison under Amar Singh at Ghasira.27