For the clan see Ghogha 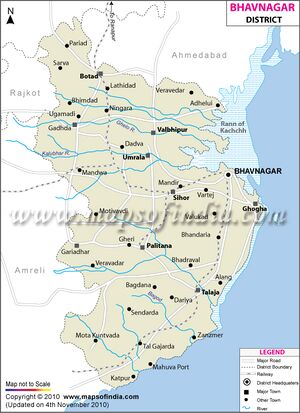 Location of Ghogha in Bhavnagar district

Ghogha (घोघा) is a town in Bhavnagar district in Gujarat. Also known as Ghoga[1] or Gogo, it was an important historical commercial port of Arabian Sea until the development of nearby Bhavnagar in the nineteenth century.

It is situated on the mid-western bank of the Gulf of Khambhat.

Under Solanki dynasty rule (746-1297), except as a nursery for seamen, Gogha was not a place of any note.

One of the earliest mentions of the town is by French explorer Friar Jordanus, who, in 1321, passing north through Thana and Broach or as he writes it Parocco, stayed at 'Gogo'. Of the place he has left no details. At this time Gogha is said to have been in the hands of Muslim soldiers of fortune, from whom, a few years later (1325), Mokhraji, the Gohel chief of Umrala, took it and with the island of Piram made it his headquarters. As ruler of Piram, Mokhraji levied toll from all ships passing up the Gulf. His exactions came to the knowledge of the Emperor Muhammad bin Tughluq (1325-1351), then quelling a revolt in Gujarat, and, in 1347, Gogha was taken, Mokhraji killed, and the Piram fort destroyed. The Emperor, satisfied with the destruction of Piram, left Gogha, at this time 'a great city with large markets,' in the hands of Dungarji, Mokhraji's son. For about fifty years the Gohels held Gogha.

Near the close of the century (1390) they were forced to pay tribute to Muzaffar Shah I, the founder of the Gujarat Sultanate. In the fifteenth century, under the powerful Gujarat Sultanate rulers, the Gohels, though they kept their title of Gogha chiefs, retired to Umrala. At this time Gogha was probably under a Muslim governor.

At the beginning of the sixteenth century (1503) it was entirely a Muslim town 'of great traffic in a fat and wealthy land.' Ten years later (1513), it was a very large town and a good port dealing in merchandize of all kinds and loading ships for Malabar and Aden.

In the struggles for mastery at sea between the Gujarat kings and the Portuguese (1507-1538), Gogha suffered. A strong and populous place of great trade surrounded by walls of brown stone, it was attacked and burnt by the Portuguese in 1531, and again, as it was beginning to recover, in 1546. Towards the close of the sixteenth century with the decay of Portuguese power, Gogha seems to have regained its trade.

The Imperial Gazetteer of India (1908:301) mentions that “the natives of this town are reckoned the best sailor or lascars in India. The ships touching here may procure water and supplies or repair damages”. A famous proverb about Gogha is “Lankani Ladi ane Ghoghono var” (Bride of Lanka and groom of Gogha) which perhaps indicates some kind of direct overseas relations of Gogha with Sri Lanka. According to the historical account, Arabs had established their colony at Gogha in the year 636 AD.

The presence of ancient Jaina temples at Gogha dating back to the 10th -11th centuries suggest that this was a religious center also. The earliest Arabic inscription from Gogha dates to 1170 AD.

During the British period ships up to 1500 tons were laden here. Pinkerton (1811) mentions that Gogha provided a harbour for the largest ships though they would lie dry on mud at low water. Gogha served as a port for Cambay, cargo being conveyed on small boats from Cambay to Gogha to be loaded on ships, the cargo unloaded from ships at Gogha being similarly transported to Cambay. Cambay was really open only to very small vessels, e.g. boats called tawri (Habib, 1982), one of which said to have been 80 tons.[5]

The port of Gogha has been active since the 5th century AD and flourished as a major trading post during the 10th to 16th century AD before Bhavnagar took the place of Gogha as trading center. Being located at strategic position in the Gulf, Gogha has always been subject of an important trading center. Due to this reason Gogha had been several times attacked and captured by local rulers like Gohel Rajputs and Muslims during the medieval period (Bell, 1980:73). Stone anchors have been found from several locations along the Indian coast particularly from early the Medieval period ports such as Dabhol (Gaur et al. 2007b) Sindhudurg (Sila and Gaur, 1997), and Vijaydurg (Sila et al., 1998) which are fairly dated between 8th to 14thcentury AD.