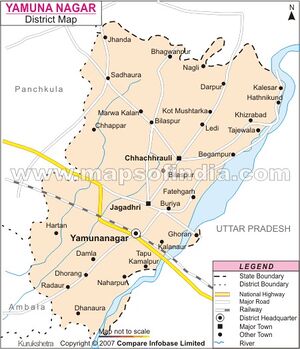 Gundana (Gunana) is a village in tahsil Jagadhri of Yamunanagar district in Haryana.

Visit by Xuanzang in 635 AD

Alexander Cunningham[1] writes that On leaving Thanesar, Hwen Thsang at first proceeded to the south for about 100 li, or 16⅔ miles, to the Kiu-hoen-cha, or Gokantha monastery, which has not yet been identified, but it is probably Gunana (?), between Vyasthali and Nisang, 17 miles to the south-south-west of Thanesar. I am obliged to notice this monastery as it is the starting-point from which Hwen Thsang measures his next journey of 400 li, or 66⅔ miles, to Su-lu-kin-na or Srughna, which makes the distance between Thanesar and Srughna just 50 miles.[2] Now Sugh, the place which I propose to identify with the capital of Srughna, is only 38 or 40 miles from Thanesar ; but as it agrees exactly in name, and corresponds generally in other particulars, I am quite satisfied that Hwen Thsang's recorded distance must be erroneous, although I am unable to suggest any probable rectification of his figures. The true distance is about 300 li, or 50 miles, from the Gokantha monastery.