Goregaon is a suburb in the Mumbai city, in the Mumbai Suburban district of India. It is a railway station on the Mumbai suburban railway on the Western Line. An extension of the Harbour Line was under construction, scheduled to be completed by 2017. 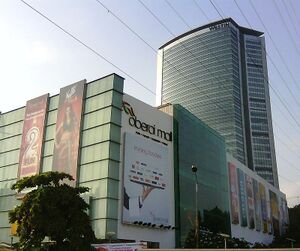 Bracketed on either side of the railway line by the Western Express Highway and Link Road, Goregaon was primarily a middle-class residential neighbourhood. However, the area is now turning into a wealthy suburb. Famous film studios such as Filmistan and Film City are located here.

Until the late 1970s, the suburb was sparsely populated, which began to change with residential localities that sprang up such as Unnat Nagar Vibhag 1 to 4, Jawahar Nagar, Motilal Nagar, Bangur Nagar, Sree Nagar, Shastri Nagar, Lokmanya Tilak Nagar Road 1 to 6 (earlier Peoples Colony), Siddharth Nagar, BEST Colony, Piramal Nagar, Mahesh Nagar and Madina Manzil in the west and Pandurang Wadi and Jaiprakash Nagar in the east.

The eastern boundary of the suburb was effectively the Western Express Highway, which separated Goregaon from Aarey Milk Colony. Aarey Milk Colony, established in 1949 and spread over an area of 1,287 hectares, houses 32 cattle farms, gardens, a nursery, lakes, an observation pavilion, picnic facilities, and milk plants.

The housing boom of the 1980s saw expansion in terms of real estate and population density. On the east, newer areas such as Dindoshi, Gokuldham, Yashodham, Saibaba Complex, Oberoi Garden City Film City Road, Amritvan, etc. and on the west, Bangur Nagar, Lokhandwala Complex (now considered a separate suburb) and Link Road were the development hubs.

Besides the above, Goregaon East also is home to the recently developed area known as New Dindoshi consisting of the Nagari Nivara Parishad (NNP), a housing scheme for the lower middle class. There are more than 30,000 people living at NNP, distributed between two zones.

Oberoi Garden City, which has started developing recently, is spread across 80 acres, next to Saibaba Complex. It includes Oberoi Mall, home to the second Starbucks coffee shop opened in Mumbai and also Westin Hotel and offices. Many other residential and business towers are also being developed. 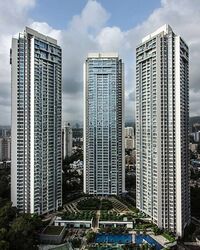 Goregaon Railway Station is the transport hub of Goregaon. The station, which currently has five platforms,goregaon has one new platform for horbourline, is being expanded as a part of the Harbour Line extension (under MUTP 2) from Andheri.[1] The expansion, involving two additional platforms and an elevated deck with passenger amenities (on the western side of the existing station) is expected to be complete by 2017.

A recently constructed sky walk connects one of the foot-over-bridges to S. V. Road near Citi Centre, a shopping complex near the M. G. Road junction. BEST has bus stations on both western as well as eastern side of the railway station. Goregaon Depot, however, is located away from the railway station, on the Link Road.

Now there is a new flyover bridge at Ram Mandir road connecting Goregaon West and East.[2]Also Ram Mandir railway station is operational since December 2016. The next important transport project for Goregaon will be the GMLR ( Goregaon Mulund Link Road ) which will be a 5km underground road consisting of two tunnels each having three lanes. This road will link Goregaon to Bhandup.

The prime land under the mango and guava plantation owned by the Topiwala Desai family was taken over by the Maharashtra government and handed over to the Mumbai Housing Board during the 1950s. The BMC market near Goregaon West railway station is still known as Topiwala Market.

Goregaon bounds Sanjay Gandhi National Park from the south-western side and is home to the Conservation Education Centre (CEC) run by the Bombay Natural History Society (BNHS). The area is home to a diverse flora and fauna. 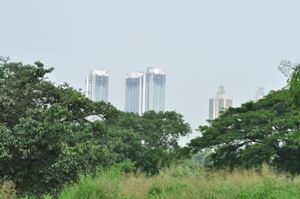 Aarey Colony and high-rises in the background

Recent 'development' on the eastern side has led to a huge amount of deforestation. Leopard sightings and even the occasional attacks[3][4][5][6] are not very rare- and not just in the hamlets inside the Aarey Milk Colony but also in large residential colonies like Nagari Nivara Parishad. Rampant construction in the last decade by builders like Oberoi on green areas has, without a doubt, had a severe impact on local biodiveristy.