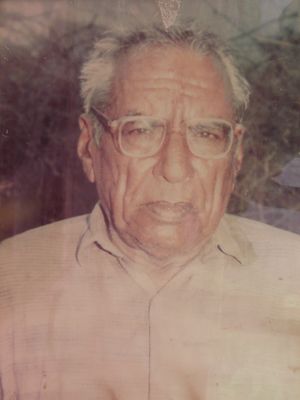 Hardev Singh Nehra (1925 – 1998) (हरदेवसिंह नेहरा) was a freedom fighter and social worker who played a leading role in Shekhawati farmers movement for abolition of Jagirdari system.

He was born in 1925 at village Harsawa of Sikar district in Rajasthan in the family of Hindu Jat Chandra Singh Nehra.

He was involved in the freedom movement from childhood when he was studying in School in village Narsara. The senior leaders of ‘Jaipur Praja-Mandal’ in Skekhawati, Ladu Ram Joshi, Kishan Singh Batar, Bhinw Raj Dugar had once organized a meeting in village Harsawa for the awakening of the villagers. The villagers insulted these leaders which heart Hardev Singh and from that time he joined the leaders of ‘Jaipur Praja-Mandal’ and motivated the villagers and successfully organised their meetings.

Hardev Singh worked at the grassroots level for awakening of the villagers through nukkad dramas and village level meetings to spread the freedom messages of Mahatma Gandhi, Tilak and Gokhale. He also came in contact with Vinoba Bhave during his visit to Sikar. After which he motivated the villagers against social evils like intoxication, untouchability and child marriage. He worked for women’s education. He started education in the village Harsawa in 1934 with the cooperation of villagers and the formal education in 1935 with the help of Birlas under ‘Varnacular’ scheme. The first Primary School in Harsawa was started by the state Govenment in 1949 only due to his efforts.[1]

Role in abolition of Jagirs

Harsawa village played an important role in the abolition of Jagirs. Before independence the conditions of the farmers were very bad. The farmers were exploited and oppressed by the Jagirdars during British Raj. They were deprived of fundamental rights. They were given inhuman treatment when the Jagirdars did not get cesses known as “lag” or “begar” in time, they were given hard punishments and their crops used to be destroyed. The farmers of Harsawa united against oppression of Jagirdars and stopped giving cesses. Chaudhari Motaram and 15 others of the village Harsawa were arrested by Raja of Sikar in 1935 and imprisoned for three months. Farmers, mainly the Jats, under the leadership of Hardev Singh Nehra joined ‘Sikar Jat-Kisan-Panchayat’ and ‘Jaipur Praja-Mandal’ along with the Shekhawati farmers. From 1944 - 1947 he worked full time with Ladu Ram Joshi and Badrinarayan Sodani. After a long struggle the farmers got rid of oppression and got the ownership rights over the land they were cultivating.[2]

Back to The Freedom Fighters