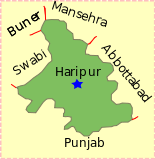 Haripur (Hindi:हरिपुर, Urdu: ہری پور) is a city and district in the Hazara region of Khyber Pakhtunkhwa province of Pakistan.

The town of Haripur (meaning 'Hari's town') was founded in 1822 by Hari Singh Nalwa the Commander-in-Chief of Ranjit Singh's army.

The Haripur district is situated at the heart of the ancient Gandhara civilization. At the time of Alexander the region including Taxila was known as "Eastern Gandhara", with its boundaries reaching as far as Kashmir. Geographically it lies on either side of the Sindhu River, (Indus the River Goddess of Rigveda), near the Tarbela Reservoir. Most historians believe that the Aryans must have composed a number of Vedic hymns on the banks of Indus. During the kingship of his father Bindusara, the Maharaja Ashoka ruled this region as governor and, according to Tibetan Buddhist traditional stories, he died here.

In 1399, the Muslim warrior Timur, on his return to Kabul, stationed his Turk soldiers in Hazara to protect the important route between Kabul and Kashmir.

By 1472, Prince Shahab-ud-Din came from Kabul and established his rule over the region. Prince Shahab-ud-Din, a Turk of central Asian origin and a descendant of Amir Taimur, founded the state and named it Pakhli Sarkar and chose the Gulibagh as his capital. Their territory at that time was up to Attock as per Raja Irshad's Tarikh e Hazara. Haripur was a part of Pakhli Sarkar at that time.

During the period of Mughal rule, local Turkish chiefs acknowledged Mughal authority. In fact, (Pakhli) provided the main route to Kashmir and was the most commonly used route for Emperor Akbar to travel to Kashmir. During the reign of Akbar one Turk Chief revolted against the authority of Moghals on the plea that the central government of Mughals were interfering too much in to internal affairs of Pakhli. Akbar defeated him. Later he pardoned him and restored his rule. But since then Mughals levied no tax on Pakhli Sarkar and perhaps this was the only state in Sub-continent, which was exempted from taxation.

In the 18th century, Turkish rule came to an end due to the increased aggression of the Swathis and their allied forces.Haripur was already liberated from Turks by Gakhars Rajas of Haripur. At that time it was not called Haripur. The area was part of Lower Tanawal area of Pkhali Sarkar and ruled by Turks of Pakhli Sarkar. The last Wali of the Lower Tanawal (headquarter Sherwan) was Sultan Qiyasuddin, the younger brother of Sultan Memood Kurd, who was the last Turk ruler in Hazara (Pakhli Sarkar). Pakhli Sarkar got a last blow when Syed Jala Shah commonly known as Jalal Baba conspired against his own father in Law i.e. Sultan Memood Kurd. the Sultan was away to Dehli, when called by Aurangzeb Alamgir for some central Asian expeditions. Syed Jalal Shah took advantage of the situation and invited Swaties to attack Pakhli Sarkar to overthrow the Turks. He succeeded and overthrew Turks in 1703. The descendants of these Turk rulers still live in various parts of Hazara Division, such as Behali, Manakrai, etc.

Sikh annexation: The Sikhs annexed Hazara in two stages. First Lower Hazara was annexed when the Sikhs defeated the Afghan army led by Fateh Khan and Dost Mohammad Khan Barakzai and wrested control of Akbar's fort of Attock in 1813. Upper Hazara suffered a similar fate when the Sikhs took Kashmir from the Barakzai Afghans in 1819.[1] The town of Haripur (meaning 'Hari's town') was founded in 1822 by Hari Singh Nalwa the Commander-in-Chief of Ranjit Singh's army following advice from Mukkadam Musharaf of Kot Najibullah. On the successful completion of his tenure as Governor of Kashmir in 1821, Pakhli and Damtaur were bestowed upon Nalwa as a jagir in 1822. As soon as Hari Singh Nalwa received this grant, he built the walled town of Haripur in the heart of the Haripur plain with the fort of Harkishan Garh encircled by a deep trench. The site selected by Hari Singh had previously seen some of the fiercest encounters between Sikhs and Afghans.

British India: Hari Singh's name and the presence of his fort at Harkishangarh eventually brought a feeling of security to the region. In 1835, Baron Heugel, a German traveller found only remnants of the four-yard thick and 16 yard high wall built to initially protect the town.[2]

The sole example of a planned town in this region until the British built Abbottabad many years later, Haripur continued to grow and flourish to eventually became a city and later a district.

Haripur once bore the official name of Haripur Hazara and was the capital of Hazara until 1853 when the new capital Abbottabad was built, named after Indian Army officer James Abbott, the first deputy commissioner of Hazara (1849–1853). In March 1849, the Punjab was annexed by the British Empire. In Abbott's time as under former Sikh domination, Haripur was the district headquarters of Hazara, but soon after he departed, Abbottabad took its place. Abbott later painted a noted picture of the town of Haripur and its commanding fort of Harkishangarh.[3]

Awan's: There are large number of people belonging to Awan tribe (marshall tribe) settled in Haripur District which are the direct descendants of Qutb Shah who came to this land along with his sons with Sultan Mehmood Ghazanvi. Awan's are thickly populated in Haripur City, Union Council Jatti Pind, Sirya, Kagg, Beer (village Gorraki, Bhattan, Kangaramgah, Kotnali, Alloli). Awans are supposed to have been migrated from Afghanistan during Ghaznavid,s invasions.

Durranis: When Ahmad Shah Durrani expanded his kingdom to Punjab, Hazara also came under his control. Durrani considered it wise to rule the area through local tribal chiefs. The Durranis' rule ended abruptly in the beginning of the 18th century.

The District of Haripur was a Tehsil, or sub-division of Abbottabad District, until 1992 when it separated and became a district in its own right. The district is presently (2010–2011) represented in the provincial assembly by four elected MPAs. One Member is elected to the National/Federal Assembly from the district.