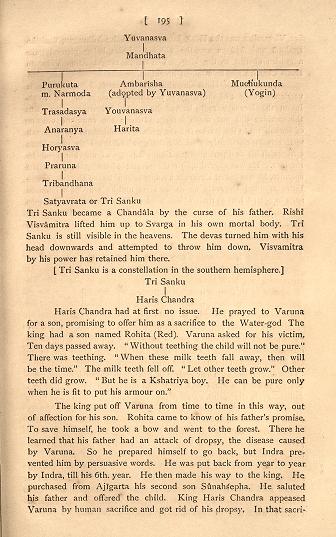 Harish Chandra (हरीशचन्द्र) (Harishchandra) was a Suryavanshi King in the line of Mandhata.

Harish Chandra was an ancient Jat King in the ancestry of Sinsinwar rulers of Bharatpur at S.No. 115.[1]

Mandhata son of Yuvanasva was a very powerful king in line of Ikshvakus. He married Indumati, daughter of Sasabindu. He had three sons Purukutsa, Ambarisha, and the Yogin Muchukunda. He had also fifty daughters.

Yuvanasva adopted his grand son Ambarisha. Ambarisha had one son Youvanasva. His son was Harita. These three, Ambarisha, Youvanasva and Harita were the founders of the chief clans of the Mandhata Dynasty.

The elemental serpents gave their sister Narmodā in marriage to Purukutsa. Purukutsa accompanied Narmoda to Rasatala at the request of Vasuki. There he killed such Gandharvas as deserved to be killed.

Tri Sanku became a Chandala by the curse of his father. Rishi Visvamitra lifted him up to Svarga in his own mortal body. Tri Sanku is still visible in the heavens. The devas turned him with his head downwards and attempted to throw him down. Visvamitra by his power has retained him there. [ Tri Sanku is a constellation in the southern hemisphere.]

Harish Chandra had at first no issue. He prayed to Varuna for a son, promising to offer him as a sacrifice to the Water-god. The king had a son named Rohita (Red). Varuna asked for his victim. Ten days passed away. " Without teething the child will not be pure." There was teething. " When these milk teeth fall away, then will be the time." The milk teeth fell off. "Let other teeth grow." Other teeth did grow. " But he is a Kshatriya boy. He can be pure only when he is fit to put his armour on."

The king put off Varuna from time to time in this way, out of affection for his son. Rohita came to know of his father's promise. To save himself, he took a bow and went to the forest. There he learned that his father had an attack of dropsy, the disease caused by Varuna. So he prepared himself to go back, but Indra prevented him by persuasive words. He was put back from year to year by Indra, till his 6th year. He then made his way to the king. He purchased from Ajigarta his second son Sunahsepha. He saluted his father and offered the child. King Haris Chandra appeased Varuna by human sacrifice and got rid of his dropsy. In that sacrifice, Visvamitra was the Hota, Jamadagni was the Adhvaryu, Vasistha Brahma and Ayasya was the Udgata. Indra being pleased gave a golden chariot to the king. Visvamitra taught Atma Vidya to Haris Chandra and he attained liberation.